If you’re looking for a custom guitar unique as your playing style, you don’t need to fret those frets, just pick Shumaker Guitar Works at 1706 N. Brady, Davenport.

The sharp shop, at suite 102, is packed with stacks of guitars and musical memorabilia along its walls, everything from vintage acoustics to flying V’s, and amidst the Fenders and Gibsons are the unique works of art created by the shop’s owner, Thad Shumaker.

Shumaker restores instruments to their classic glory and is also happy to build a one-of-a-kind axe to your specifications at a price that’s in line with a new instrument from another brand.

“Say you want a ’59 Les Paul but you can’t afford it, I can make you a replica of that, or I can make an instrument according to your own design specifications,” Shumaker said. “I can also make instruments for kids just getting started out or left-handed guitars. I’ve got a little something for everyone.”

Shumaker got started playing guitar when he was seven, played throughout his teens and into adulthood, and remembers watching with fascination in music stores as instruments were getting refurbished.

“My grandfather did instrument repair, he took it up after his retirement from International Harvester, and so that got me interested, and he taught me a lot before he passed away,” Shumaker said, “but I’ve wanted to do this since I was a little kid going into Gary’s Music Mart in Silvis taking guitar lessons. I loved watching them repair and work on those classic instruments. I’d make my Mom hang around so I could watch those guys do the repairs to those old instruments. It was inspiring to me at a young age. It was just always what I wanted to do. I always was fascinated by it. I was bored at my other job and I needed a switch, so my beautiful wife gave me her blessing, and so this is what I’m doing now.” 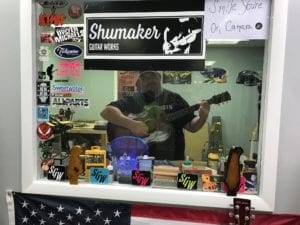 So if you’ve got an old guitar sitting around from your playing days that you’d like to have fine-tuned, or an inherited classic you’re thinking of resurrecting, he’s the man.

“Generally, I get them back to where they’re like normal and back to where people can enjoy playing them again,” Shumaker said. “I always try to retain the instruments’ original character. I take pride in being able to bring instruments back from the dead, whether they’re family heirlooms or instruments that have been sitting in closets for years.

“I just enjoy doing it, it’s fun, it’s relaxing for me,” he said. “I love my job and I’m happy to be a good part of the Quad-Cities business community.”

How did he know he’d be able to make money doing it?

“I actually know a lot of the guys who work at other shops around the area, and after talking to them and some other people in the business I knew there was a market there for me, because this is a niche market, because I build guitars from scratch that makes me different from anyone else. And because I build the guitars and refurbish the older guitars that makes me different from a lot of the other shops around the area.”

So, what are some of the types of guitar requests he gets? Do people come in with pictures of their guitar heroes and ask him to replicate the axes in those pics, or do they send him custom designs of their own?

Typically, one way for guitar makers to break bigger in the biz is to get a famous musician, or several, to pick up one of their instruments. Once it’s seen in enough music magazines, websites and on stage, people start to sniff out the origin story. Shumaker says he’d love to have that lightning bolt strike for him. 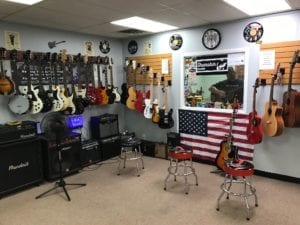 “One could dream, I’ve got guitars all over the United States, Florida, Kentucky, Memphis, it’s just taken several years of building and I’ve had people order multiple guitars from me, so they’ve been great repeat customers, so word’s getting out. Everyone wants to be unique, and that’s one way to be unique is to have a guitar that no one else has. In my dreams, my name will get out there and I’ll find the right musician.”

Along those lines, Shumaker has reached out to various famous musicians with an offer to build them guitars, in hopes of getting his name out there and getting some buzz, and he’s talking to former Quad-Citian and well-known recording star Lissie to craft her a custom.

“You’ve got to try to get your guitar into the right hands, and with her being locally famous and famous on the national circuit and in Europe, that would be the right way to do it,” Shumaker said. “We’ll see.”

So, what’s the secret to making a great guitar?

“I can’t tell you, it’s a secret,” Shumaker laughed, adding that his work on the neck pockets and utilization of top-notch materials and personal workmanship (rather than mass production) are both key to his high quality. “That’s something I always want to take pride in is the quality of my instruments.”

How long does it take to put together a guitar and how much do they run? Typically, in line with other brands’ guitars – anywhere from $750-$1500 for a general style. As for how long it takes, that depends on the piece, but generally between two months and a year.

“I don’t let it go out of my hands until I’m satisfied with it, I want to make sure it’s done as well as I can make it before I let it go,” he said.

“When I first started doing this my slogan was quality handmade guitars for the average man’s pocket,” he said. “There are a lot of great quality guitars out there, but a lot of them are way out of the average person’s price range, and I didn’t want to do that. I try not to be out of the range of a custom shop Gibson or Fender, and people can get a custom Gibson or Fender, but the fact that someone can say ‘this is an entirely handmade guitar,’ that’s a difference that really sets it apart.” 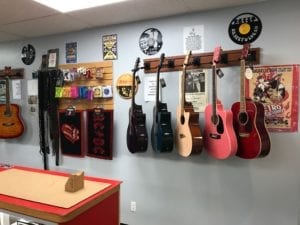 Another thing that sets the guitar slinger apart is his commitment to the Quad-Cities, the local music scene and one particular area charity.  Shumaker is part of the Nate Nicholson Foundation, named after the former Funktastic Five legend, whose goal is to provide an instrument and a year of free lessons to a local student.

“I want to pride myself on being the friendly shop for people, doing good work and having quick turnaround times,” Shumaker said. “I want to make this a shop where everyone feels welcome and all ages and all music fans can come to visit.”

So next time you’re looking for an instrument as distinct as you, try on a Shu – a Shumaker, that is.