Home › Featured Business › Pineapple On A Pizza??? How About Pineapple IN A BEER??!!!??

Should pineapple go in beer? 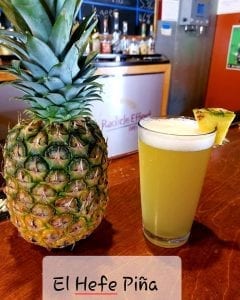 Did he actually say that???

You’re damn right I did.

Because that’s just how I roll.

And I like pineapple. I like it on my pizza. I like it in smoothies. Hell, I even put a little pineapple juice in my hair from time to time, what do you think holds it up like this, slick?

There, I said it.

And I tell you this, because if you’re not completely scandalized by now and haven’t thrown your computer or laptop or mobile phone across the room in a blind rage over the mere suggestion (and if you have, you probably need a drink right now anyway, because that was really dumb and now you’re going to have to shell out some bucks to get a new one), you might want to head over to Radicle Effect at 1340 31st Street in Rock Island for the El Hefe Pina.

The “warm weather inspired beer” is “a pineapple hefeweizen, light in body with subtle banana and pineapple aromas and a serious citrus sharpness.” But don’t just believe me, believe whoever wrote that and posted it on Radicle’s facebook page, because I just lifted that description right from there, pretty much at the same time I was lifting my own pint of El Hefe Pina.

And so is El Hefe Pina, as it balances between the light and the dark, the fruity and the creamy, the hoppy and the not-so-hoppy. Honestly, I was almost surprised at how subtle the pineapple is, it’s actually got more of that banana mouthfeel, with more of a creamy finish, kinda like Bent River’s Peach Cobbler, which I reviewed a few weeks back in this column. It’s refreshing, but it’s also got some substance to it. Kinda like pineapple juice. Nice and summery. And while it goes down pretty smooth and easy, if you down a couple of these, you’re going to feel the warmth.

On the day I tried El Hefe Pina, it was literally 20 below zero with the wind chill, and it was a pretty packed Sunday at Radicle. Did it cast aside the winter blues? Well, as well as anything can after several months of living in freaking Antarctica.

If you love pineapple, banana, or anything of that ilk, you’re going to love El Hefe. I really liked it a lot. Not enough to marry it, because I’m faithful to my imaginary wife Zooey Deschanel, but enough to have a brief yet memorable affair with it and just hope our sordid tale stays out of the imaginary tabloids, because I think all those dudes on “New Girl” would be seriously imaginarily angry with me. They look a little pretty and lightweight, so I could probably take them on one at a time, but if they all ganged up together it would seriously tax my ninja skills.

If you absolutely loathe pineapple anything, or banana, you’ve probably already stopped reading this column. Which is too bad for you, wise ass, because the winning powerball numbers for Tuesday are 16-21-3-34-19 and the powerball is 6.

And also, El Hefe Pina is pretty damn tasty and you should go try it.

Get yourself a slight sliver of sunshine in a glass while you can. It’s at Radicle the next week or two, or basically until they run out.

Then post about it on facebook and watch as people go crazy arguing over whether pineapple should go into beer or not. You might want to also add your opinions on whether or not it should go on pizza. I’ve heard that might be a conversation starter. And then you can have that conversation over a pint or two of El Hefe Pina.

Awww. See what I did there? Yeah.