Home › Featured Business › It’s Game On For Land of Oz!

It’s Game On For Land of Oz!

Mike Rankins is putting the pep back in Pac Man, the thrills into Evel Knievel’s pinball machine and the spring back in Mario’s step.

That’s because the Muscatine-born-and-raised 46-year-old is the mastermind behind The Land of Oz Arcade Restoration, 801 Oregon Street, Muscatine, a business dedicated to repairing any and all arcade games, personal video games, electronics and more. 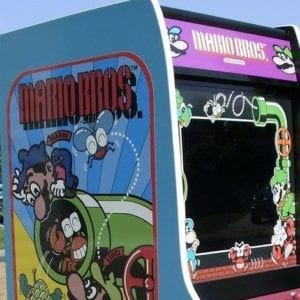 Rankins has been restoring video games and related ilk for over 25 years, mostly as a hobby, but after repairing over 200 games over the Christmas season two years ago and continuing to rake in the pixels, he decided to turn it into a business.

“I’ve been messing with these machines since I was old enough to throw a quarter in them,” Rankins said. “I started on Nintendos, just tearing them apart and putting them back together. People used to have to blow into them to get the dust out thinking that would help when they would kick out and it wouldn’t work so they would ask me to help them fix them. I just liked doing it, so I moved on to pinball machines and other arcade games It’s something I’ve always been interested in, and now it’s become a business for me.”

Rankins’ father worked part time at the Land Of Oz arcade located in the Muscatine mall suite “208” back in the early ‘80s, hence his business name, a tribute to both his Dad and the arcade he spent his formative years.

“He busted his knuckles everyday working two jobs, there at night, and day on the police force,” Rankins said. “I remember him showing me how an Asteroids arcade machine was wired and a run down of how things worked in pinball machines as well. I have been hooked on these coin operated machines ever since. Back in the early 90’s I got a phone call from someone that had a Galaga arcade in their basement — The thing wouldn’t turn on and could not find anyone in Iowa that work on these games. Ended up getting the machine up and running, so that’s how it all started.” 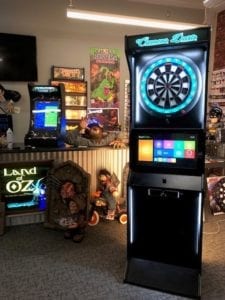 Rankins completely refurbishes the games, using their original parts as much as possible, and as such it can be quite an arduous and skillful dance to reconstruct them to their original sheen, particularly on the vintage games.

“It can be pretty difficult and a bit of a challenge,” he said. “Back in 1978 they didn’t always follow code, so you have to know the logic of the games and have to follow that to try to rebuild them. Also, rebuilding the parts can take a while. But the satisfaction of bringing something back when it was completely dead and then turning it back into something brand new is a great feeling.

“It’s not really the money that drives me, it’s that feeling of recreating something, turning it from a pile of junk into a show piece that someone will really enjoy,” he said.

“To me, this is about recreating a magical time in my youth and other people’s,” he said. “Making people happy, recreating that, is an amazing feeling.”