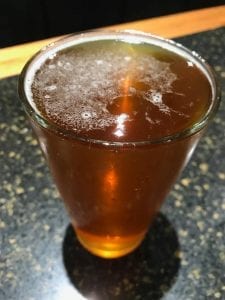 You want a fall beverage that’s really going to warm up your ugg boots and steam up your Han Solo vest and stretch pants?

Head over to your friendly neighborhood HyVee Marketplace Café and get yourself the O’Fallon Vanilla Pumpkin Beer, which is now on tap.

After having a couple of these, you’ll feel like you’re cheating on your Starbucks in the best of ways and the worse of ways.

When I first saw the Vanilla Pumpkin Beer on tap, of course dozens of basic white girl jokes came tumbling out of my brain like so many wicked treats out of a Halloween bag, but given that I also enjoy a good PSL every once in a while (insert basic white boy jokes here), I had to try it.

Now, I’ve had a lot of pumpkin beers before. They’re pretty much fall de rigeur at this point. Almost every brew pub worth its hops and most daring brands of in-store microbrews have tried their hand at a pumpkin bevvy, and they’ve succeeded and failed to varying degrees.

At their best, they taste like a delirious first kiss in front of a campfire, spiced and iced and very nice.

At their worst, they taste like you just walked into a crop dusting of someone spraying pumpkin spice Glade after they just dropped a five-alarm deuce in the office bathroom.

You’re welcome for that image.

The O’Fallon tastes like none other, in the best of ways.

For one, it’s absolutely delicious, very much on the top end in terms of flavor and buzz factor among its ilk.

But for another, it has no real ilk. It’s not a pumpkin beer, per se, and that’s because of the addition of the vanilla. 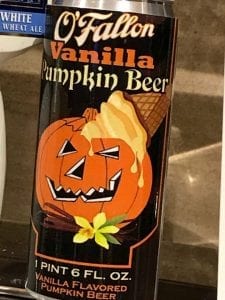 When I was in Omaha and Denver over the summer, I had a couple of vanilla style beers at microbreweries there, and they both had distinct flavors, the same way French vanilla isn’t quite the same as regular vanilla. It’s the same here with the O’Fallon.

First thing you notice is that it smells like pumpkin pie with whipped cream, and then you taste it, and it goes down smooth, and sweet and spicy but in a subtle way, and there’s something so delectable about it that, like that slice of pie after Thanksgiving dinner, it’s hard to have just one.

I’m sure over the coming season, I’ll be drinking and possibly writing about, other pumpkin brews in the area.

But the O’Fallon, so far, is unique. It’s more than just a pumpkin beer, it’s a wonderful mix of the spicy fall pumpkin and the creamy vanilla sweetness that make it so intoxicating.

If you’re not a fan of pumpkin spice anything, by this point you’ve probably long given up bothering with this column. But if you are, you’ve probably made it to this sentence (good for you! Congratulations!) and so you’ll allow me to tell you to get your sweet ass over to your nearest HyVee Marketplace café and try one of these sweet, sweet microbrews. Starbucks will forgive you. And you can thank me later.