“The stories we understand ourselves to be living in shape our choices a great deal – around climate destruction, just like other pressing social problems,” said Hamner. 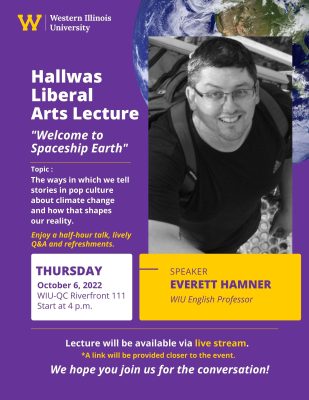 The lecture series began in 2003 after WIU’s College of Arts and Sciences program initiated an effort to slow the decline in public interest related to broader education and concerns about the negative impact on democracy and social commitment. Since the initiative began, many WIU faculty have delivered impactful lectures.

Hamner’s lecture will dive into how the stories we tell and hear can either weaken or strengthen our responsiveness to measurable physical realities. His goals are to draw on a wide range of liberal arts traditions and challenge both academic and nonacademic audiences toward broad, urgent climate action. The core idea? That we can reach beyond endless delays and partisanship only by consciously choosing stories compatible with a livable future. Our emotions are key here: in facing the facts of our situation; neither cynical fatalism nor naive optimism will prove sufficient.

“What we can imagine heavily shapes the reality we create. If you’re an engineer, a supply chain manager, a teacher, a counselor, a farmer, you name it—you have an idea of future conditions that constantly affect the risks you’re willing to take. Yes, we use hard data and we need to use it a lot more. But on the starship we call Earth, we also rely a great deal on popular cultural narratives, for better and for worse, consciously and unconsciously,” Hamner said.

Hamner has been an English professor at WIU since 2008. Before his time at WIU, he earned his doctoral degree from the University of Iowa after completing degrees at Johns Hopkins in Baltimore, MD, and Regent College in Vancouver. As coordinator for the English and Liberal Arts and Sciences (LAS) programs at WIU-Quad Cities, Hamner thrives on serving students preparing for work and graduate programs in a very wide range of fields, including education, professional writing and editing, museum studies, counseling and social work, and various fields of communication and public relations. As a scholar, Hamner’s expertise lies in literature, film and popular culture’s relationships with science and religion and politics, with particular interests in genetics and climate change. His book, “Editing the Soul: Science and Fiction in the Genome Age,” helped launch a new Anthropocene series at Penn State University Press in 2017. and he publishes regularly in public facing outlets like The Los Angeles Review of Books.

Recently, Hamner’s writing has turned from bioengineering individual human beings to a much larger scale of human transformation, a pattern he calls “climate destruction” or “Earth systems sabotage.” Beyond his teaching and writing, his interests include advising the interdisciplinary English and the Arts Society (IDEAS) and serving as a high school baseball coach for the last three years.

Following the half-hour, media-heavy talk, the event will feature a conversation with audience members, as well as light refreshments.

The event is open free to the public, and will be available via live stream. A link will be provided closer to the event.