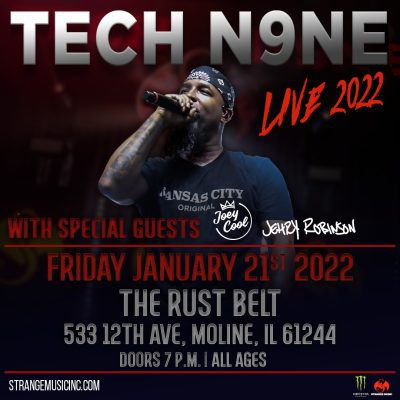 Tech N9ne
Tech’s unparalleled tour schedule and signature rapid-fire “chopper” style combined with the business acumen of Strange Music CEO Travis O’Guin have molded Strange Music into the number one independent hip-hop label in the world.
In less than two decades, Tech himself has earned three gold records, sold over two million albums, and made multiple appearances on Forbes’s “Hip-Hop Cash Kings” list. Tech’s multi-faceted skillset has not gone unrecognized by artists of all genres, exemplified by collaborations with such diverse artists as The Doors, Slipknot’s Corey Taylor, Eminem, and Boyz II Men, to name just a few. Everyone from Dwayne “The Rock” Johnson
Joey Cool
Joey Cool is just that. Cool. The name is a reflection of his nonchalant bravado and swagger, but don’t get it twisted. Though he may have this effortlessly “cool” persona, Joey comes for your head each and every time he picks up the mic. With a knifing drawl, fleet flow, and dense lyrics, Joey Cool transcends his moniker when he’s on the attack. His unwavering confidence and how he backs it up on the mic is what made Joey a pillar of the Kansas City hip-hop scene.
Jehry Robinson
Hailing from the Empire State, Jehry Robinson has established himself as a musical force to be reckoned with. Drawing inspiration from artists such as Wyclef, J Cole and fellow New Yorker, Jay Z, Jehry came up on the independent scene, producing many of his own beats and releasing music with his FBA management before signing to Strange Music in December 2019. Fusing his influences of hip hop, alternative, reggae and pop, Jehry weaves a sonic tapestry that’s instantly engaging.