Home › Columns › Sean Leary › You Won’t BELIEVE Who Jake Paul Is Fighting Next!!!

You Won’t BELIEVE Who Jake Paul Is Fighting Next!!!

Jake Paul can’t stop courting controversy, or people wanting to punch him in the face.

Paul has long elicited the enmity of countless people, going back to when he was on the Disney Channel series Bizaardvark, and pushing a

rap career that saw his single, “It’s Everyday Bro“, become the third most disliked video in YouTube history. The hate/love relationship with Paul has continued with his boxing career, which has seen people lining up to pay in the hope of seeing him get his ass kicked.

Thus far, Paul has led a pretty charmed life in the ring, disappointing his haters.

His first bout wasn’t much of a surprise result, as Paul knocked out a fellow YouTuber, AnEsonGib (known as Gib), in the first round.

Second bout, little bigger deal, but still, kinda meh. Paul got a second-round KO against former NBA player Nate Robinson. Now, you look at that and think, “Hmmm… he had to fight a professional athlete.” But then you look at the details, and you see that Robinson is only 5’9″ tall and was probably 20 pounds lighter and with a shorter reach than Paul, and that Robinson wasn’t a professional fighter, just a former pro baller who’s also much older than Paul.

Paul’s third fight, on the other hand, looked a lot more interesting.

He was fighting former Bellator MMA and ONE Welterweight Champion Ben Askren. 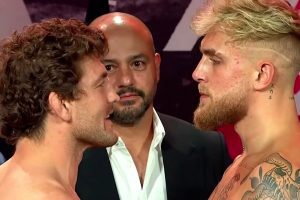 Jake Paul and Ben Askren talk about getting some wings after the fight while Mariah Carey’s ex-husband looks on.

According to Askren’s Wikipedia, the 36-year-old was the 2008 US Olympic Team Member and National champion and the 2005 Pan American champion in freestyle wrestling, a two–time NCAA Division I national champion (four–time finalist), and two–time Big 12 Conference champion (four–time finalist) for the Missouri Tigers, and was the second wrestler to secure multiple Dan Hodge Trophies (the wrestling equivalent of the Heisman Trophy) in folkstyle wrestling. He was also a world champion in submission wrestling.

During his time fighting MMA, he routinely got smashed in the face with fists, feet, knees and elbows by fighters far tougher and better trained than Paul.

So, of course, he “lost”* to Paul by TKO in the first round.

I put those parenthesis and asterisk there because, quite frankly, I think the fight was staged. I don’t think there’s any way a healthy and motivated Askren, with all his experience, would’ve gotten knocked out by what seemed to be a glancing blow from Paul.

I’m not alone. Many, many MMA fighters, commentators and fight fans called BS on the result of the fight, with one of the best commentary pieces being this one from sportsbible that points out Askren’s inexplicably sunny demeanor after being knocked out by a YouTube star.

But, that’s water, and a hefty paycheck, under the bridge.

The question now has been, who is Paul going to fight next?

He’s obviously got a good thing going, and he’s marketing himself in a smart way. Everyone hates/loves watching the heel in professional fighting, whether it’s wrestling or MMA. They like seeing the heel, because they tune in to see the heel lose. Paul has set himself up as the heel — loud-mouthed, brash, arrogant — and it’s been incredibly smart and lucrative for him. I give him credit for that. Just like I give him credit for obviously working hard to get into boxing shape. I’ve done that before, it’s not easy; in fact, it’s pretty hard work.

Does Jake Paul really want to get a roundhouse kick to the face from a guy wearing these bad boys?

There’s been some speculation of Paul getting in the ring with someone like Floyd Mayweather or Conor McGregor, but I can’t imagine that.

Both of those guys are legit champions who are closer to their peaks now than Askren was, and I can’t see either, with their massive egos, signing on for an early knockout to a guy who made his bones pulling stunts on Disney channel.

No, I think Paul’s next opponent needs to be someone special, someone distinct, someone who mixes sports and entertainment, who blends braggadocio and swagger just as loudly, who could step into the ring with Paul, and slap him away with little effort, all while barely getting his zubaz pants dirty.

There’s really only ONE person who should fight Jake Paul next.

And that person, of course, is Rex Kwon Do. 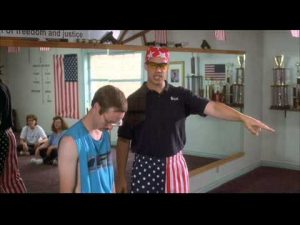 “Go sit over there next to Jake Paul!”

Rex Kwon Do taught Kip how to get babes.

And most of all, let us not forget that Rex Kwon Do got Starla.

Maybe Rex Kwon Do has too much experience for Paul.

After all, Rex Kwon Do spent two seasons fighting in the Octagon, and developed one of the most awesome and unbeatable systems of fighting to ever exist and be taught to pupils within an 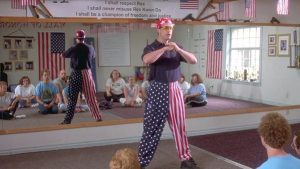 Rex Kwon Do also has his own Wall of Honor, and his own credo:

I will respect Rex

I will not misuse Rex Kwon Do

I will be a champion of freedom and justice.

Do YOU have your own credo, Jake Paul?

As of now, there hasn’t been any serious talk about Paul facing off against Rex. Probably because he’s too intimidated to consider it. But once this column gets out to my ones of readers and goes viral, once the national sports media gets ahold of this story, it’s going to be to too hot to handle. The momentum will be too much to ignore, a tidal wave of fever and furor to get Paul in the ring against a REAL American hero — Rex Kwon Do!

You know you want to see it!

And so does Starla!

Sean Leary
Sean Leary is an author, director, artist, musician, producer and entrepreneur who has been writing professionally since debuting at age 11 in the pages of the Comics Buyers Guide. An honors graduate of the University of Southern California masters program, he has written over 50 books including the best-sellers The Arimathean, Every Number is Lucky to Someone and We Are All Characters.
See More Articles From Sean Leary
Tagged: #benaskren#jakepaul#jakepaulfightfixed#paulfightfixedben askrenconor mcgregorfixed fightfloyd mayweatherjake paulkipmariah carey's creepy husbandMMANapoleon Dynamiterexrex kwon dosportsbiblestarla