WQPT will stream a virtual commemoration of the 155th anniversary of Juneteenth on June 19 at 11:00 am. 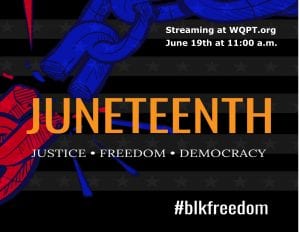 Six leading Black museums and historical institutions from coast to coast have joined forces to launch a digital commemoration of Juneteenth, the day that the Emancipation Proclamation was officially enforced, ending enslavement in Texas.

This timely event features cultural performances from Africa and across America, educational content and appearances by:

Lonnie G. Bunch III, the first African American and first historian to serve as the Secretary of the Smithsonian Institution

The Honorable Carla Hayden, Librarian of Congress, the first woman and the first African American to lead the national library

Juneteenth dates back to June 19, 1865, when union soldier, Major General Gordon Granger, landed at Galveston, Texas, with the news that the war had ended and that the enslaved were now free. This announcement was more than two and half years after President Lincoln signed the Emancipation Proclamation.

To watch visit wqpt.org or visit the WQPT Facebook page at 11 am on Friday, June 19.

Sean Leary
Sean Leary is an author, director, artist, musician, producer and entrepreneur who has been writing professionally since debuting at age 11 in the pages of the Comics Buyers Guide. An honors graduate of the University of Southern California masters program, he has written over 50 books including the best-sellers The Arimathean, Every Number is Lucky to Someone and We Are All Characters.
See More Articles From Sean Leary
Tagged: JuneteenthJuneteenth Festivalonline juneteenthWQPT