Word Up! It’s Time For A Sweet Video You Deserve

It’s Monday, so how about some candy with your Video You Deserve?

Sometimes we’ve got to dig a little deeper than the biggest hits to come up with the funniest videos for an artist. That’s the case this week.

If I were to mention the act Cameo, I’d bet probably, once you remembered them, about 80 percent or more of you would remember their biggest hit, “Word Up,” and no doubt that song and video are fantastic. That tune, which hit the top 10 all over the world, including the U.S. and UK, was an undeniable smash, and had an awesomely goofy video which featured the band being taken in by a detective played by LaVar Burton, best known for his work on “Roots,” 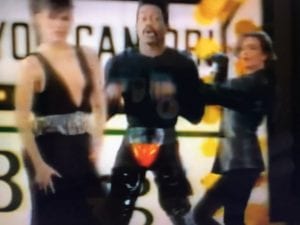 Hello, I’m Larry Blackmon, and I’d like you to meet my bright red codpiece. Church ladies, avert your eyes!

“Reading Rainbow” and “Star Trek.” Their crime? Being too damn funky.

Ok, ok, you’re saying, how can I top that in terms of cheesiness?

Now, “Candy” wasn’t quite as big of a hit. It hit number one on the r&b charts, and the top 10 on the dance charts, but only peaked at 21 on the pop charts, and made some minor ripples across Europe, but never registered as big as “Word Up.”

But oh, the video.

I mean, really, look at this thing. It’s a cornucopia of corny ‘80s styles and fashions, led by the inimitable Cameo frontman, Larry Blackmon. 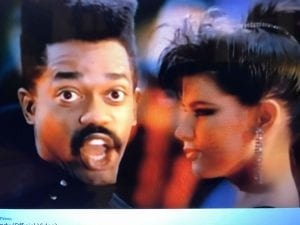 “OWWWW!”  I can’t be sure that’s exactly what he’s saying, but if I had to wager…

Of course, it’s got Blackmon’s signature red codpiece, along with the gloriously goofy gigantic bushy mustaches and blocky hairstyles of the time, but it’s also got some of the most massive ‘80s shoulder pads you’re likely to find in a video, as well as that once-ubiquitous tights-and-big-shouldered-blazer combo outfit, and various women in costumes and hairstyles straight from the era of “Stranger Things.”

As glorious as “Word Up” is, I think “Candy” might surpass it in terms of just being pure goofy fun, and definitely of its time.

After “Candy,” the group began its slide downward career-wise, which was unfortunate, because leading up to “Word Up,” from 1979 to 1986, just about every year they released an album which would chart in the top 30 and drop some interesting dance hits, like 1984’s “She’s Strange.” But after breaking through, like many acts, they fizzled out.

Their next album after ‘86’s “Word Up,” called “Machismo,” failed to chart substantially, peaking at 56 on the top 200, and their next two albums missed the chart entirely. Cameo went on hiatus for more than a decade, but came back and began playing the nostalgia tour circuit around 2015, where they remain today.

Not today, literally, because noplace is open because of covid.

But today, literally, they do remain on one stage – the one we offer for The Video You Deserve.

Sean Leary
Sean Leary is an author, director, artist, musician, producer and entrepreneur who has been writing professionally since debuting at age 11 in the pages of the Comics Buyers Guide. An honors graduate of the University of Southern California masters program, he has written over 50 books including the best-sellers The Arimathean, Every Number is Lucky to Someone and We Are All Characters.
See More Articles From Sean Leary
Tagged: cameocandylarry blackmonmachismoSean Learyvideo you deserveword up