Robert Lopresti, a retired government information librarian from Western Washington University, (WWU) will discuss his award-winning book, “When Women Didn’t Count”(Praeger, 2017). The presentation is sponsored by WIU Libraries in acknowledgment of Women’s History 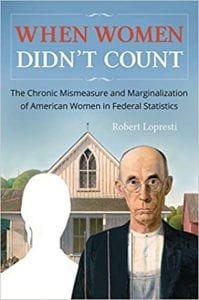 Lopresti retired in 2018, after working for 41 years as a librarian at WWU in Bellingham, WA. His book “When Women Didn’t Count” won the Lane/Saunders Memorial Research Award from the American Library Association. Lopresti is also the author of two novels and more than 70 short stories, which have won the Derringer and Black Orchid Novella awards.

Lopresti’s book details how two centuries of federal government data have hidden and distorted the lives of American women.

“In 1940, the Census takers recorded hundreds of women working for the railroads as engineers, mechanics and so on. In the published reports they were listed as tailors because the government did not believe they could really be doing those jobs,” Lopresti said.

WIU Professor of University Libraries Michael Lorenzen said the Census and other documents have hidden the facts about women’s work, health and history.

“These publications are considered among the most accurate data about Americans, but much that has appeared about women has been inaccurate or misleading – sometimes dangerously so,” he said.

“We are very fortunate to have such an accomplished and well-regarded author speaking about his topic and his book. Robert Lopresti is a respected government documents librarian, and his book really shows how women have been mistreated by federal statistics all the way back to the founding of the American Republic,” Lorenzen said.

The presentation will be held via Zoom at wiu.zoom.us/j/97904886943. The event is open free to the University community and the public.

For more information about the event, contact Lorenzen at mg-lorenzen@wiu.edu.

Sean Leary
Sean Leary is an author, director, artist, musician, producer and entrepreneur who has been writing professionally since debuting at age 11 in the pages of the Comics Buyers Guide. An honors graduate of the University of Southern California masters program, he has written over 50 books including the best-sellers The Arimathean, Every Number is Lucky to Someone and We Are All Characters.
See More Articles From Sean Leary
Tagged: booksmichael lorenzenrobert loprestivirtual eventsWestern Illinois UniversityWIUwomen's history month