With Halloween Approaching, I Think It’s Time We Asked, Do Ghosts Fart?

Ever walk into your house after you’ve been away, or walk into a room and notice a strange smell?

Of course, once you do, you have to try to find it, to try to get rid of it, because who wants a strange smell in their house?

I’ll usually look for some dropped food or something behind or under furniture, and sometimes that’s the case. Some bit of stray potable that tried to escape and sadly discovered its motion was limited to whatever got it there in the first place, and then was left, saddened, and chastened, to rot in bitterness and disappointment. It’s like the Brando of pizza toppings. Poor green pepper. You coulda been a contender.

But what if it’s not a rogue vegetable?

My next guess is that it’s a croaked mouse. They’ll get into the house from time to time, especially in the winter, and will end up kickin’ it, and not in the sense that they put on Hammer pants and break dance. And once they get to a certain ripeness, they’ll emit a foul stench.

But what if it’s not a mouse?

You sure about that?

Then what is it? 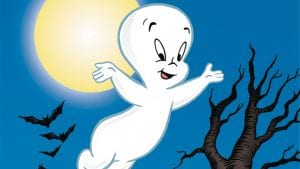 He who smelt it dealt it, Casper.

I’ve often wondered about this, since ghosts seem to engage in some banal and goofy activity. People will talk about ghosts leaving cabinets open or opening kitchen drawers or moving little items around.

Because of course that’s not the people in the house, who have just forgotten they left a kitchen cabinet open.

So, if ghosts love spending their time doing goofy, little stuff like that, playing practical jokes and such, why wouldn’t they step into a room and pop one?

Why not get someone to blame the other person in the room for their farts? Or get them to think there’s something else going on, and then ghost giggling as they look around and under the furniture?

So, my vote is that yes, yes, ghosts probably do fart.

And aren’t you glad that incredibly important question has been answered?

Sean Leary
Sean Leary is an author, director, artist, musician, producer and entrepreneur who has been writing professionally since debuting at age 11 in the pages of the Comics Buyers Guide. An honors graduate of the University of Southern California masters program, he has written over 50 books including the best-sellers The Arimathean, Every Number is Lucky to Someone and We Are All Characters.
See More Articles From Sean Leary
Tagged: casperdo ghosts fartDo Vampires Poop?ghostsparanormalparanormal activitiesparanormal activitySean Learyspirits