MACOMB/Moline, IL – It’s a grand day for Col. Rock IV (aka Ray) as his sweet face now graces an officially licensed and limited edition bobblehead, produced by the National Bobblehead Hall of Fame and Museum, and today’s unveiling happens to be on National Bobblehead Day.

The Col. Rock IV bobblehead sits on a base bearing his name and the Leathernecks logo. The AKC-certified English bulldog is wearing his official “W” jersey, and his ever-present Bulldog tongue is part of the statuette. The bobbleheads, which are individually numbered to 2,021, are available at the University Bookstore, at a cost of $25 (direct link: bit.ly/WIURayBobblehead). A portion of the proceeds from the bobblehead sales support WIU’s live mascot program. 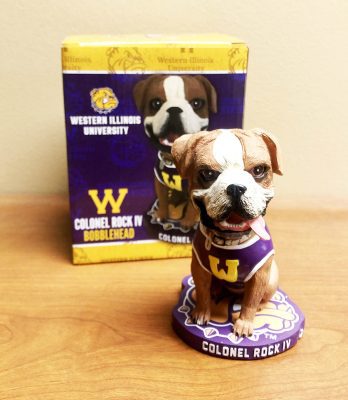 Rocky joined the WIU family on May 15, 2010 as a 10-week-old puppy and was WIU’s first official four-legged mascot since the 1970s. He officially retired in Summer 2019, when the collar was passed to Ray as WIU’s official live mascot. Both Rocky and Ray were donated by Richard and Beth Siess of the Siess Ranch in Seneca, Kansas. While they are not directly related, there is a distant lineage between Colonel Rock III and Colonel Rock IV, who is called “Ray” after WIU’s legendary longtime coach and athletic director Ray “Rock” Hanson, a Marine Corps veteran. WIU alumni Joe Roselieb, executive director of auxiliary services and risk management, and Ketra Roselieb, executive director of financial affairs, house and train (and chauffeur) Ray, who will turn four on Feb. 14. The Roseliebs were also the caretakers for Rocky, who passed away January 25, 2021, just shy of his 11th birthday.

In Fall 2021, the Mascot Memorial Plaza project was unveiled outside of the University, which pays tribute to WIU’s live mascots, both past and present. The project also includes a donors’ plaque, as well as a commemorative plaque that showcases a timeline of the live mascot program and each dog’s years of service. The statue is surrounded by an alumni plaza, which is made of bricks inscribed with the names of alumni and friends.

Sean Leary
Sean Leary is an author, director, artist, musician, producer and entrepreneur who has been writing professionally since debuting at age 11 in the pages of the Comics Buyers Guide. An honors graduate of the University of Southern California masters program, he has written over 50 books including the best-sellers The Arimathean, Every Number is Lucky to Someone and We Are All Characters.
See More Articles From Sean Leary
Tagged: col rock bobbleheadWestern Illinois UniversityWIU