Western Illinois University’s student-run broadcast news and sports media, as well as the radio station, have been named as finalists for the annual Intercollegiate Broadcasting System (IBS) Media Awards, to be held in March. 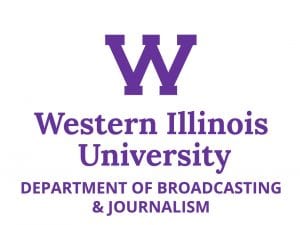 “Our students work extremely hard to comprehensively cover the news on campus, and in the community, and the nominations for the awards are a testament to that dedication,” said Instructor Jessica M. Martin. “I am very proud of all of the students and look forward to the conference and the awards ceremony with the students.”

“We are very excited that our students’ hard work is being recognized on a national stage and creating a chance for them to continue to build their portfolios for professional endeavors,” said Parker. “It’s been an emotional year for everyone and they’ve overcome so much in their pursuit to continue our department’s success. We’re very pleased and excited for all of them.”

The 81st annual IBS Media Awards will be held during this year’s IBS Conference, which is scheduled virtually for March 2-6. The conference consists of broadcasting workshops and guest speakers. The conference will conclude with the awards ceremony.

NEWS3 is the student-run television station and WIUS-88.3 FM is the student-operated radio station at WIU. Both are located within the University’s Department of Broadcasting and Journalism.

Sean Leary
Sean Leary is an author, director, artist, musician, producer and entrepreneur who has been writing professionally since debuting at age 11 in the pages of the Comics Buyers Guide. An honors graduate of the University of Southern California masters program, he has written over 50 books including the best-sellers The Arimathean, Every Number is Lucky to Someone and We Are All Characters.
See More Articles From Sean Leary
Tagged: Western Illinois UniversityWIUwiu journalism and mediawiu journalism department