A Western Illinois University junior music education major is transitioning the lessons from her academic experience into leading a children’s theatre production.

“The Odd Kingdom” was written by and is being directed by Racquel Rawlins, of Beardstown. Rawlins said the park district’s program director asked her to stage a children’s production this summer because of her experience leading a choir for young girls in the area.

“I had directed shows previously to raise money for the opera house,” she said. 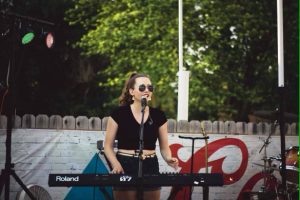 The show, which includes 14 area children ranging in age from 5-12, began rehearsals June 7. Actors meet three times a week for two-hour sessions to practice their parts.

The musical is set in Medieval times and is about a king who loves hats. The king hosts a contest, offering his son’s hand in marriage to the designer of his favorite new hat.

Rawlins said it was her classes at WIU that helped teach her methods to work to teach children. She credits Assistant Professor Ryan Aguirre with showing her how to incorporate movement and dancing into her work with young people, and Professor Richard Cangro with teaching methods for teaching young children.

“I have been using movement and dancing to help with the show to get the actors used to the music and rhythm,” she said.

In addition to directing the children’s production, Rawlins is also playing a lead role as “Sophie” in a production of “Mamma Mia” at the Beardstown High School Auditorium Friday-Sunday, July 16-18. The Friday and Saturday shows begin at 7 p.m. and the Sunday matinee opens at 2 p.m. General admission tickets are $10 and children under 5 are admitted free.

She is also teaching voice lessons to a group of girls in Beardstown, and performing at area venues with her sister’s band, “The Aileana Rawlins Band,” where she sings back-up vocals and plays the keyboard.

After graduating from WIU, Rawlins hopes to teach music in an elementary school.

For more information about the WIU School of Music, visit wiu.edu/music.

Sean Leary
Sean Leary is an author, director, artist, musician, producer and entrepreneur who has been writing professionally since debuting at age 11 in the pages of the Comics Buyers Guide. An honors graduate of the University of Southern California masters program, he has written over 50 books including the best-sellers The Arimathean, Every Number is Lucky to Someone and We Are All Characters.
See More Articles From Sean Leary
Tagged: beardstownracquel rawlinsWestern Illinois UniversityWIUwiu school of music