It’s a place where memories live on.

In June 2021, the new Gwendolyn Brooks Memorial Parks was dedicated following a successful fundraising campaign. The park, located on the corner of Adams and Normal streets on the WIU-Macomb campus, is on the site of the former Gwendolyn Brooks Cultural Center (GBCC), originally called the Black Cultural Center (BCC), and on the ancestral lands of the Illinois (Inoca) indigenous people. The Gwendolyn Brooks Memorial Park was created to honor the legacy of an American icon and award-winning poet, the Illinois Poet Laureate, Pulitzer Prize winner, nurturer of excellence and Western’s first Honorary Doctorate recipient. 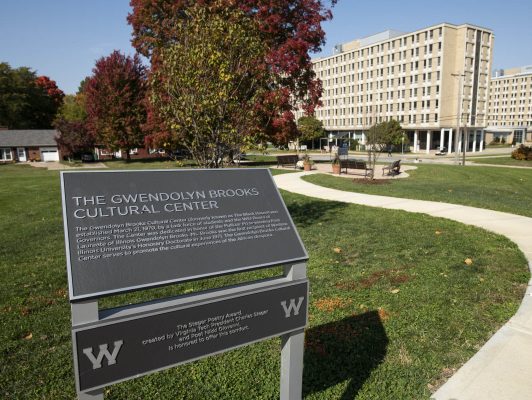 The BCC was established in 1969 as a result of the WIU Black Student Association and a WIU student task force. It was dedicated as the Gwendolyn Brooks Cultural Center on March 21, 1970. The GBCC, also known as “The Black House,” served as a home away from home for 32 years before moving to the Multicultural Center in August 2009.

As part of the park, which features trees/landscaping, plaques, benches purchased in honor of individuals and WIU organizations, there is also an engraved brick patio that honors the memories of alumni and friends, along with Western organizations, past and present.  WIU and Western Lab School Alumnus Chris Francisco of Macomb purchased a brick to honor the memory of his former classmate Jerome Willis Noble, who passed away unexpectedly in 1974. The pair first met in a class at Western in Fall 1968.

“The first person I met in an earth science class at Western was Jerome Noble. He came into class late and he sat in one of the few open seats, which happened to be next to me. His attire was camouflage Army dress as he literally was just home from Vietnam,” Francisco recalled. “He was from the south side of Chicago and I lived in Industry, Illinois, and I was protesting the war and Jerome served and faced the horrors of that debacle in Southeast Asia – we were from two very different worlds.

“In spite of our differences, we became study partners for him to maintain his grades and his track scholarship and for me to maintain my student deferment. We were held together, at first by need, but then in friendship,” he added. “I learned of the Gwendolyn Brooks Memorial Park through my classmate, Deana Harris. When I mentioned Jerome to her, she shared her deep affection for him as well. While he passed away long ago, Jerome has been with me since that time, learning about what all that adult stuff was about. I made the donation in his name to say the thank you I didn’t get to say before he died. Jerome is part of the Black House legacy. He touched lives and awakened a sense of unity in my heart.”

Doug Shaw, a 1995 graduate and chair of WIU’s Board of Trustees, is a member of Alpha Phi Alpha fraternity. The fraternity purchased a bench, along with a brick, at the park to honor their organization and its past, current and future members. “The members of Alpha Phi Alpha Fraternity, Inc. Eta Eta chapter have a strong connection to Gwendolyn Brooks Cultural Center (GBCC). Our first planning meetings regarding chartering a chapter in Macomb on the WIU campus were held at the GBCC, which was a safe haven for the Black students at WIU. Alphas held their social activities at the center and used it for study hours, and it was the preferred meeting place for many Black activities on campus,” Shaw said. “For more than 35 years, our fraternity hosted their largest annual social event, ‘Black & Gold’ week at GBCC, and many of our activities wouldn’t have been possible without the GBCC. The center’s legacy will always be a part of Alpha Phi Alpha fraternity and our history. When the opportunity to honor those memories was available, our organization purchased a bench and several bricks, and we’re already working on purchasing more bricks to commemorate our organization and the legacy of the GBCC.”

Individuals interested in purchasing a brick contact visit wiu.edu/student_services/mcc/ (click on Gwendolyn Brooks Memorial Park”), text WIUBrick to 41444, which will direct individuals to a payment page, or contact WIU Multicultural Center Associate Director Carl Ervin at CA-Ervin@wiu.edu. Bricks are $100 each. To date, 88 bricks have been purchased.

The Gwendolyn Brooks Park Project was spearheaded by former WIU President Jack Thomas, State Sen. Kimberly Lightford and Past WIU Black Alumni Committee President and former Trustee Lyneir Cole. The memorial park was made possible by donations from alumni and friends, including significant contributions from the WIU Black Alumni Council; a State of Illinois grant; and the WIU Foundation.

“The Gwendolyn Brooks Cultural Center has brought people together on our campus for decades. The park honors our Center’s beginnings and WIU’s first Honorary Doctorate and Illinois Poet Laureate Gwendolyn Brooks. It will provide a lasting tribute and a tranquil gathering place for all for decades to come,” said Multicultural Center Director Rocio Ayard Ochoa. “We greatly appreciate the dedication and support for this beautiful project.”

Sean Leary
Sean Leary is an author, director, artist, musician, producer and entrepreneur who has been writing professionally since debuting at age 11 in the pages of the Comics Buyers Guide. An honors graduate of the University of Southern California masters program, he has written over 50 books including the best-sellers The Arimathean, Every Number is Lucky to Someone and We Are All Characters.
See More Articles From Sean Leary
Tagged: Western Illinois UniversityWIU