Watts joined OPS in 1998 as a patrol officer. He was promoted to corporal in 2006 and to sergeant in 2009. A 1996 and 2015 graduate of the WIU School of Law Enforcement and Justice Administration, Watts was promoted to lieutenant in 2018. He started his law enforcement 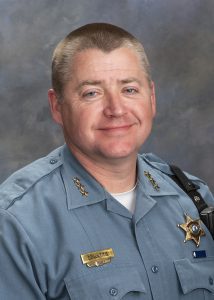 “Mr. Watts’ proved during his time serving as interim director that he is a solid leader. His long tenure with WIU and OPS, and his in-depth knowledge of, and commitment to, Western will serve the department and our University well for years to come,” said Interim Vice President for Student Services John Smith.

Under his leadership, the Office of Public Safety has maintained the Illinois Law Enforcement Accreditation Program (ILEAP) Tier I Accreditation in Spring 2019 and was one of just 34 police agencies across the state to achieve accreditation. Watts has served as a RAD (Rape Aggression Defense) instructor since 1999. He has also served as the Office of Public Safety’s Arrest and Control instructor since 2001. Watts has also served as an Illinois Police Corps Phase Manager in Summer 2002 and Summer 2003 and as an Illinois Police Corps arrest and control instructor (2001-2003). He is a graduate of the 2011-2012 Northwestern University School of Police Staff and Command Class #323. Watts has served as an adjunct instructor in the WIU School of LEJA since January 2019 and as a WIU Building Connections mentor. He is a member of the Illinois Association of Chiefs of Police, the Illinois College Law Enforcement Administrators, Illinois Law Enforcement Alert System, the WIU Fraternal Order of Police Lodge No. 169 and the McDonough County Quality of Life Committee.

“It is my honor to continue my career at Western Illinois University‘s Office of Public Safety as the Chief of Police/Director of Public Safety,” Watts said. “I joined WIU in 1998 with the intent to remain at my alma mater for the remainder of my law enforcement career and I appreciate the many people who have assisted me along this journey. I will take great pride in leading an outstanding group of officers, telecommunicators and civilian staff into the future.”

Watts is also an active volunteer in the community, coaching youth baseball from 2010-2019, as well as serving a coach and director with his community’s junior football league.

Sean Leary
Sean Leary is an author, director, artist, musician, producer and entrepreneur who has been writing professionally since debuting at age 11 in the pages of the Comics Buyers Guide. An honors graduate of the University of Southern California masters program, he has written over 50 books including the best-sellers The Arimathean, Every Number is Lucky to Someone and We Are All Characters.
See More Articles From Sean Leary
Tagged: derek wattsmacombMolineWestern Illinois UniversityWIUwiu office of public safety