Quad-Cities author Connie Wilson is celebrating the days of the presidential debate, and a few other special days, by offering people FREE copies of her e-book, “Bee Gone.”

Wilson’s ebook will be free on Amazon.com the following days:

These are the dates of the debates:

5) October 23 – RBG FREE day
According to Connie, here’s a description of the book: 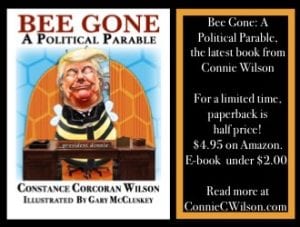 Bee Gone: A Political Parable is a rhyming, illustrated short e-book that examines the thought, (articulated by Barack Obama), “Elections have consequences.” Given its timing, perhaps it will encourage those who did not vote in 2016 to go to the polls and vote in 2020.

In a very short story about a disgruntled drone in a bee hive who wants to take over the hive from the queen bee, the key take-away can be described (in the words of the book) this way: “So, the hive lost its honey, its Queen, and its money. It was really a mess, and that isn’t funny.”

The outstanding illustrations by illustrator Gary McCluskey are spot-on. They are both amusing and illustrative of today’s political situation. (Gary says, “It’s the most fun I ever had at work.”)

No matter what your political affiliation, no matter how divided in our individual beliefs, we all agree that citizens in a democracy must exercise their right to vote in order to insure that our democracy continues to function properly. Elections must be fair. Citizens must participate. Elections must be supervised to assure that they are not influenced illegally by outside forces.

If you’re a Democratic or Independent voter, you will probably chuckle all the way through this book.

If you’re a die-hard Trump supporter, maybe not so much.

Whatever your political leanings, enjoy the excellent illustrations and let’s try to remember that, so far, in this country, we all are allowed to express our opinion(s) under the First Amendment to the Constitution. Let’s hope we never lose that.

Lighten up and enjoy Bee Gone: A Political Parable! Order your copy today or check out Amazon’s Look Inside feature to read the first few pages.

For more information, see her author page on Amazon.

Sean Leary
Sean Leary is an author, director, artist, musician, producer and entrepreneur who has been writing professionally since debuting at age 11 in the pages of the Comics Buyers Guide. An honors graduate of the University of Southern California masters program, he has written over 50 books including the best-sellers The Arimathean, Every Number is Lucky to Someone and We Are All Characters.
See More Articles From Sean Leary
Tagged: amazon.combee gone: a political parableConnie Corcoran WilsonConnie Wilsonfree bookskindlequadcities authors