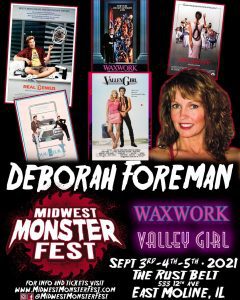 Deborah Foreman is coming to Midwest Monster Fest 2021!
Midwest Monster Fest 2021 is proud to announce Deborah Foreman to the September 3rd-5th event at The Rust Belt in East Moline, Illinois!
Deborah Lynn Foreman is an American actress. She is perhaps best known for her starring role in Valley Girl opposite Nicolas Cage. She is also regarded as a scream queen and known for playing in various horror films of the 1980s, such as April Fool’s Day, Waxwork, Destroyer, and Sundown: The Vampire in Retreat
Deborahs appearance was made possible by the sponsorship from Author Ben Clayton!
Get your tickets now at Co-Op Records of Moline and www.midwestmonsterfest.com
#midwestmonsterfest2021
#midwestmonsterfest
#deborahforeman
#waxwork
#aprilfoolsday
#valleygirl
Advertisement

Sean Leary
Sean Leary is an author, director, artist, musician, producer and entrepreneur who has been writing professionally since debuting at age 11 in the pages of the Comics Buyers Guide. An honors graduate of the University of Southern California masters program, he has written over 50 books including the best-sellers The Arimathean, Every Number is Lucky to Someone and We Are All Characters.
See More Articles From Sean Leary
Tagged: deborah foremanmidwest monster fest 2021Rust Belt