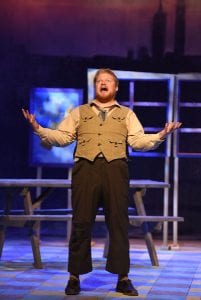 The series features performances by a variety of Broadway stars, with many of the concerts featuring an online “sing-off” where Rudetsky asks listeners to submit videos of themselves singing one of the featured stars’ most iconic songs. Rudetsky chooses a winner from hundreds of submissions each week, and plays their submission video live on the concert series.

Since graduating from Western, Edris has been cast in two professional theatre productions, both of which were unfortunately cancelled because of COVID-19.

“While waiting for theaters to open back up, I have been teaching music at the grade school and high school level, teaching voice lessons, helping with dance classes at a nearby studio, and directing a musical at a high school near me,” said Edris.

Because performing as the Genie in “Aladdin” is a “dream role” for Edris, he said he decided to submit a video for Rudetsky’s concert series.

“Ever since I was a child, I have been in love with the Genie,” he said. “To be able to make people laugh, sing and dance was a dream for me. So when I heard that Seth was having a concert with James Monroe Iglehart, the original Genie on Broadway, and the song to submit was ‘Friend Like Me,’ I knew I had to submit a video.”

Edris said he learned of his win while watching the concert series and he later received an email from the show’s producer. He said he has heard from family and friends, and his Instagram followers, about his win.

It is the confidence he learned as a student in the WIU Department of Theatre and Dance that Edris approaches his career with.

“There is only one ‘me’ in this world and no one can act, sing, and dance exactly the same way I do,” he said. “Each person in this world brings something special to the table, and we have to walk in with our heads high saying, ‘I got this.’ As the great (WIU Associate Professor) Lysa Fox would say, Nothing is going to blow up, no one is going to die. Just do it.’

After graduating from WIU, Bonzi moved to Chicago and earned a role as the title character in the musical, “Eleanor’s Very Merry Christmas 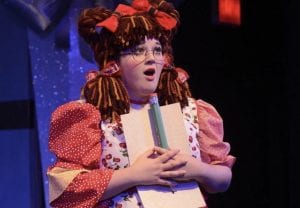 Wish,” based on a book by Denise McGowan-Tracey. Performances of the show during this past holiday season were halted because of the pandemic. She hopes to move to New York City when the nation is medically safer.

Bonzi decided to create a submission for Rudetsky’s concert series because she has always been a fan of Block’s work.

“I was lucky enough to be selected as the winner, and Seth played my submission during the concert for Stephanie and all the people watching,” she said. “It meant so much to hear Stephanie and Seth review my performance and applaud my efforts. It was truly a humbling moment.”

Like Edris, Bonzi learned of her concert series win by watching it live, though she knew she had landed in the top five because of an Instagram story post by Rudetsky prior to the show.

“Knowing that these two Broadway legends had seen my video was enough for me,” she said. “Midway through Stephanie’s concert, Seth announced me as the winner and I just remember not even believing it. I honestly thought I heard wrong, and I was in complete shock, but of course incredibly grateful.”

Since her win, Bonzi has been interviewed by several news outlets, which she is grateful for because she said “it gave many people the opportunity to see what a great school WIU is,” and the exposure resulted in a Broadway producer following her on Instagram. It was at WIU where Bonzi said she received the “full package of tools” she needed to succeed in the theatrical field.

“I learned skills that undoubtedly lead to my successes during and after my time there,” she said. “I was blessed with so many amazing professors, directors, choreographers, and most importantly, true mentors and friends. I owe so much to my alma mater, and I will forever be grateful for my experiences there.”

“Samantha had started working consistently in Chicago and Logan was just getting started with some impressive contracts prior to the pandemic,” said Fox. “There’s clearly great things in store for these artists when our industry gets back up and running. I’m so proud that they are both keeping up their chops.”

For more information about the WIU Department of Theatre and Dance, visit wiu.edu/theatre.

Sean Leary
Sean Leary is an author, director, artist, musician, producer and entrepreneur who has been writing professionally since debuting at age 11 in the pages of the Comics Buyers Guide. An honors graduate of the University of Southern California masters program, he has written over 50 books including the best-sellers The Arimathean, Every Number is Lucky to Someone and We Are All Characters.
See More Articles From Sean Leary
Tagged: broadwayworld.comlogan edrisquadcities universitiessam bonziseth rudetskyWestern Illinois UniversityWIUwiu department of theater and dancewiu theater program