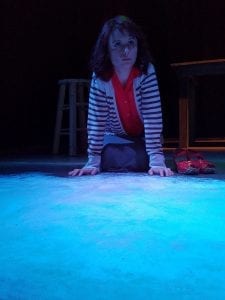 After selling out the initial three-weekend run of performances of the world-premiere of Aaron Randolph’s Broken the QC Theatre Workshop has added three additional performances to meet the high demand – one of which has already sold out.

Broken, produced in partnership with Braking Traffik and supported by a grant from the Regional Development Authority, has wowed audiences and critics alike, and the Workshop has already received requests from other organizations around the country that fight human trafficking for information about the play, and possible production in cities as far away as Atlanta, Georgia.

Within one day of announcing the additional performances, the added Friday show sold out, and the added Saturday show is almost sold out. Audience members are strongly encouraged to make reservations at www.QCTheatreWorkshop.org , or to arrive at the theatre a half hour before any show time to be added to a wait list, to claim possible last-minute cancelled seats or no-shows.

Sean Leary
Sean Leary is an author, director, artist, musician, producer and entrepreneur who has been writing professionally since debuting at age 11 in the pages of the Comics Buyers Guide. An honors graduate of the University of Southern California masters program, he has written over 50 books including the best-sellers The Arimathean, Every Number is Lucky to Someone and We Are All Characters.
See More Articles From Sean Leary
Tagged: Aaron RandolphBreaking TraffikBrokenQC Theatre WorkshopRegional Development Authority