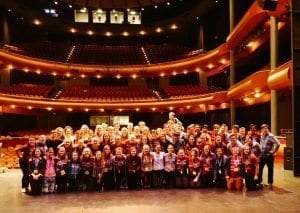 Pleasant Valley High School, home of International Thespian Troupe 856, Bettendorf, Iowa and Wahlert High School, home of International Thespian Troupe 3842, Dubuque, Iowa will be performing at the nation’s leading high school theatre festival, which is produced by the Educational Theatre Association. Pleasant Valley will be presenting Sweeny Todd: The Demon Barber of Fleet Street and Wahlert will be presenting [title of show]. (Complete list of schools and shows follows.)

The International Thespian Festival, produced by the Educational Theatre Association, celebrates student achievement in the performing arts. The 54-year-old event, which this year takes place June 17-24 at the University of Nebraska in Lincoln, brings together more than 4,000 high school drama students and their teachers for a weeklong immersion in classes, lessons in critical observation, and opportunities to perform for an audience of their peers from across the nation and around the world.

An additional 46 schools have been honored with invitations to perform on other stages during the week.

Sean Leary
Sean Leary is an author, director, artist, musician, producer and entrepreneur who has been writing professionally since debuting at age 11 in the pages of the Comics Buyers Guide. An honors graduate of the University of Southern California masters program, he has written over 50 books including the best-sellers The Arimathean, Every Number is Lucky to Someone and We Are All Characters.
See More Articles From Sean Leary
Tagged: BettendorfEducational Theatre AssociationInternational Thespian FestivalInternational Thespian Troupe 856Pleasant Valley