In the book Let it Snow!, jointly written by John Green, Maureen Johnson and Lauren Myracle, the character Tobin is terrified to ask his best friend Angie out because he doesn’t want to risk an unhappy ending. But he secretly loves her. And over the course of their adventure to get to a Waffle House during a blizzard in North Carolina, Tobin starts to court the idea of a happy middle… regardless of whether things go to pieces.

Quad City Music Guild has mounted one of their strongest productions ever with West Side Story. I rank it up there with Les Misérables, both Children of Edens, Fiddler on the Roof, Drowsy Chaperone, Little Women, Meet Me in St. Louis, Peter Pan, Oklahoma, both It’s a Wonderful Lifes, and Man of La Mancha, the very first show I saw at Music Guild when I was twelve.

Directed by Bob Williams, with assistance from Sarah Lounsberry, music director Bob Manasco, and choreographer Stephanie DeLacy, Music Guild’s 2017 production of West Side Story brings back to life Maria and Tony. Maria is of Puerto Rican descent. Her brother, Bernardo, is the de facto leader of the Sharks. Tony runs with the Caucasian crowd, the Jets. 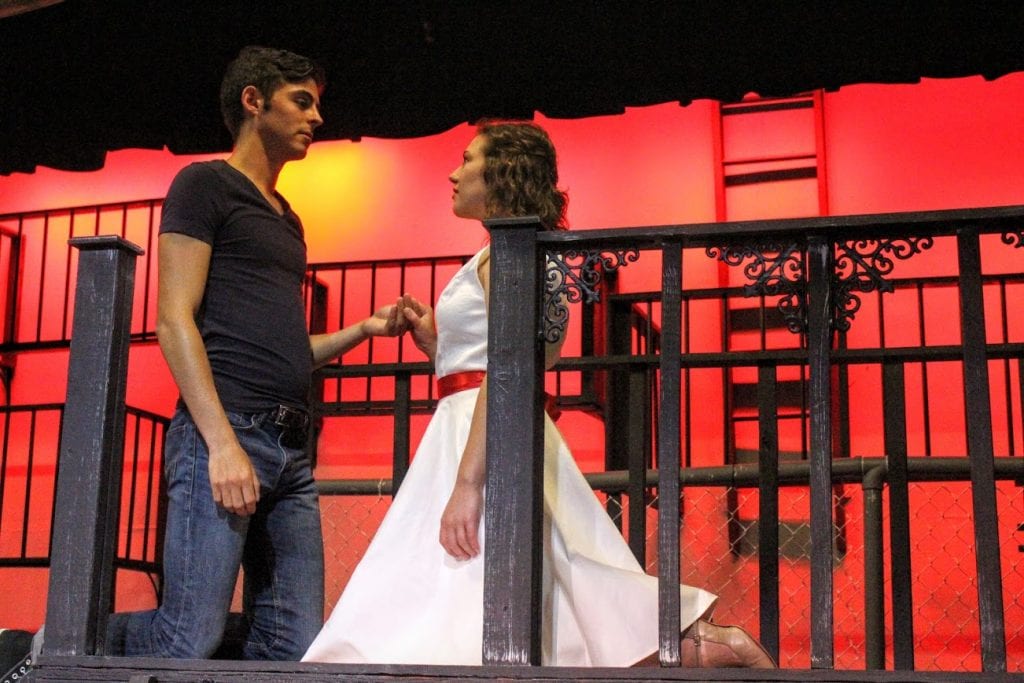 The Jets and the Sharks have a rivalry that runs deeper than mere turf war. They bitterly despise each other, squarely on the basis of race. Yes, this play tackles some hot button issues. But it attacks them head-on. I first saw the show at Music Guild in 1998, when Mike Gant directed it. It is just as prescient now.

Callen Brown does a beautiful job of playing Maria. Having studied Spanish in high school, her Spanish accent is very authentic.

John Whitson, so great as Bert in Mary Poppins, constantly surprised me with the great American accent he got for this show… what’s that? The cockney British accent he had in Mary Poppins wasn’t his real accent? But but wait, I was in that show with him… Even now I’m trying to wrap my head around the fact he’s American.

There’s a dance at the gymnasium. The Jets had depended upon Tony as their commander. Tony declines this lifestyle. So Riff starts to take up some of that responsibility. Riff hates Puerto Ricans. He thinks they have a chip on their shoulder and may as well go back to where they came from. But to assign the Jets the symbol of bad guy would be to ignore the fact that the Sharks draw first blood when they have a big rumble.

More on the rumble later.

First, Tony meets Maria. It is love at first sight. Drawing back on that happy middle concept, Tony and Maria have great happiness. Tony doesn’t have to woo her; he has her eating out of his hands. John and Callen are not approaching this performance as just another acting job. They invest it with all the emotional energy you could hope for. We accept that love can happen at first sight because of that.

Andy Sederquist as Riff the Jet and Michael Alexander as Bernardo the Shark only barely control their rage as Tony and Maria find each other. Andy Sederquist wasn’t so much playing a New Yorker as being one. It was as if he went to New York and lived there for several months, how naturally he has slipped into the dialect. It made me want to go to the Stage Door Deli near Broadway and 48th for a bagel and a coffee. And I would have run into him there. Take it from me, Andy was great!!!

Michael Alexander had a crackling intensity as Bernardo. Yes, he is a victim of his environment. He is a casualty of his upbringing. But Bernardo stokes rage, and keeps the cycle of acrimony moving around and around… even as his sister Maria serves as the symbol of peace, understanding and tolerance. But there’s nothing political about Maria. She just loves Tony, regardless of his native language, ethnic heritage or citizenship. Ditto for Tony. He doesn’t look at her as a Puerto Rican. When they sing, they sing from the heart. Callen has a very sweet mezzo-soprano that does well to emote Maria’s intentions.

Jake Walker plays Lieutenant Shrank. Now that I have seen this musical three times, I know better than to think to myself “Oh, thank God the police are here.” Shrank may have been a good and decent beat cop in his younger days. But as a grizzled veteran detective, he’s a curmudgeonly racist who actually hopes that the Jets and Sharks rumble so that they can do his job for him; he plays them off of each other. Bad cops are part of the problem. Not all cops. I thank the police force for the job they do. But the Lieutenant Shranks out there, it turns out, aren’t going to be our Greek chorus in a Stephen Sondheim Musical.

Walker was excellent as Shrank, and he was so funny in Into the Woods last year. I think the algorithm for keeping him at Music Guild is to continually work in a Sondheim show.

Bodies start hitting the floor as the first act ends. And we realize the sands in the hourglass are running out for the romance of Tony and Maria. But to reference another John Green book, The Fault in Our Stars, there are greater and lesser infinities. And Tony and Maria have a small infinity of love, and just the possibility of love gives this show enormous heart.

Callen spoke about how relevant the show was on Paula Sands Live. Bob Williams did the same in the program notes, and at the Music Guild tea in February. I’ve got to get this off my chest before my Dunkin’ Donuts coffee wears off. 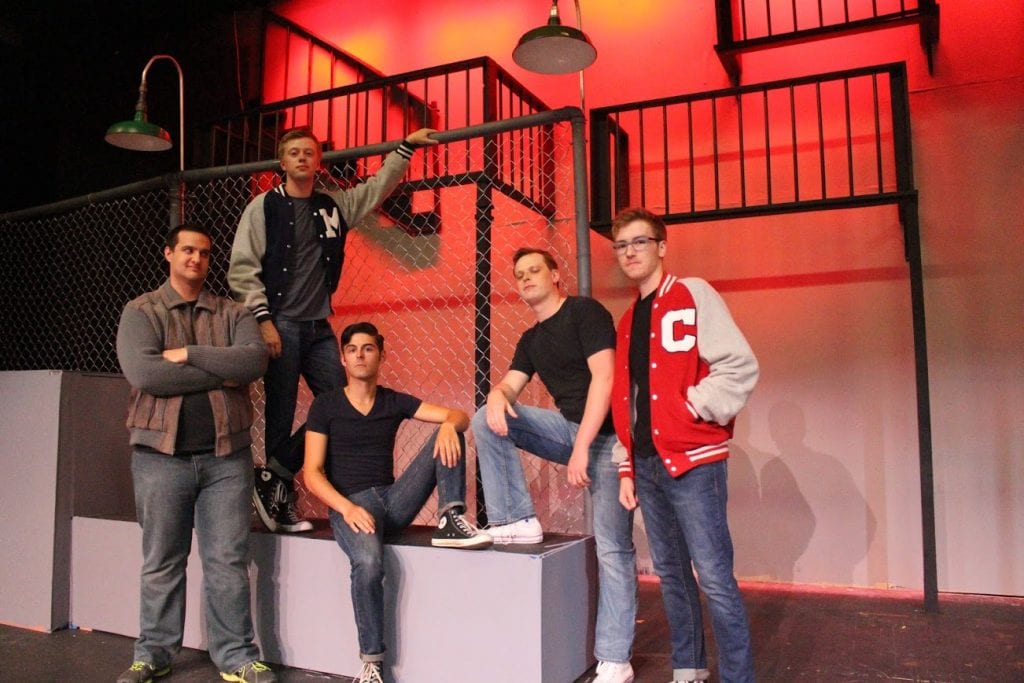 Building a wall isn’t going to resolve conflict between Mexico and the United States. It’s only going to build acrimony between all of Latin America and the United States. And Puerto Rico’s a protected annex of the United States. An 18 billion dollar wall across desert in California, Arizona, and New Mexico will only be a status symbol of unwelcome. And Mexico’s an ally! I think that I would appeal to Congress and the Executive Branch to at least approach this matter from a point of finance. It’s expensive. Too expensive.

If they can’t convince the president to change course, then I have to call on Congress to stonewall, delay, oppose, obstruct, and otherwise complicate advancement of border wall legislation. Disregarding the damage it suggests of inviting prejudice, I call on Democrats and Republicans to veto on the basis that it hemorrhages federal money, tax dollars, to put it up. A dent in our federal reserve we could live without.

I’ve flown over that part of the country in an airplane. It’s a beautiful, barren desert. It’s kind of nice to not know where America ends and Mexico begins.

I know that’s a hot button issue. I know I risk offending friends. But there it is.

But back to West Side Story. Too many great performances to mention off hand. Steve Trainor’s voice of reason as Doc was a welcomed presence, he is the best ally Tony and Maria have. Heather Herkleman, Anthony Greer, Daniel Williams, Chelsea Ward, Lauren Larson, and a host of other actors so numerous I can’t mention them all here made this a memorable show. The actors worked very, very hard to get it to the pristine level of quality. And they told a worthwhile story in the process.

Get your tickets now. I predict that they will sell out next weekend.

Greg O'Neill
Greg O'Neill is a Spanish teacher at Lewistown Community High School. A native of Rock Island, he currently resides between there and Lewistown. He has been onstage at Quad City Music Guild, Playcrafter's Barn Theatre, Richmond Hill Theatre, and Genesius Guild. He got his start at St. Joseph's Catholic Church when he appeared in Tales of Wonder at the age of eleven. He enjoys movies, theatre, books, baseball, and writing stories.
See More Articles From Greg O'Neill
Tagged: local theaterMolineMusic GuildProspect ParkWest Side Story