Sean Leary September 20th, 2018 Things To Do, Theatre, Local, Events Share:
Countryside Community Theatre will hold auditions for the holiday classic, A CHRISTMAS CAROL, onSunday September 23.
Based on the Charles Dickens classic, A CHRISTMAS CAROL tells the tale of  the curmudgeonly Ebenezer Scrooge, who is visited by the ghosts of Christmases Past, Present and Future hoping to change his destiny and save his soul. The new musical adaptation by Danny White (Music and Lyrics) and Tristan Tapscott (Adaptation and New Book) follows an older man writing down his memories of an older gentleman he once knew. As we hear his stories, we travel back in time where we meet Scrooge through a series of strange and magical journeys and colorful characters, where he ultimately discovers the true spirit of the holiday season. 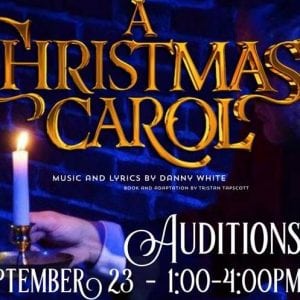 This version of A CHRISTMAS CAROL premiered in the Quad Cities in 2012 and had subsequent productions in 2014 and 2015, all at the former District Theatre. The 2013 production of the show was filmed and televised on WQPT, a local PBS station, over the holidays. The production was a critical and audience favorite during its annual performances in Rock Island and this will mark its Iowa premier.
Auditions for Tapscott and White’s A CHRISTMAS CAROL will be held on Sunday, September 23 from 1:00pm-4:00pm at Boll’s Community Center in Princeton, Iowa. Performers should prepare 16 bars of a standard musical theatre piece and be prepared to read from the script. Countryside is seeking 12-17 performers all of ages to fill a cast of familiar characters from Tiny Tim to Old Man Scrooge. All roles are open. Rehearsals are slated to begin November 4 and the production opens December 14 at Boll’s Community Center in Princeton. This production will be Directed by Tristan Tapscott with Musical Direction by Cindy Ramos.
Board President Lonnie Behnke said, “We are excited about this new era of Countryside and can’t wait to bring this holiday classic back to the Quad Cities.” “It’s really terrific piece and a wonderful family affair,” he added. Director Tristan Tapscott said, “This tale of redemption has been a life saver for me over the years and I’m grateful to Countryside for taking a risk on not only me but on one of my favorite projects.”
Countryside will present A CHRISTMAS CAROL December 14, 15, 20, 21 and 22 at 7:30pm andDecember 16 at 2:30pm at Boll’s Community Center in Princeton, Iowa. All tickets are $15 and will be on sale soon at www.cctonstage.org.
Advertisement

Sean Leary
Sean Leary is an author, director, artist, musician, producer and entrepreneur who has been writing professionally since debuting at age 11 in the pages of the Comics Buyers Guide. An honors graduate of the University of Southern California masters program, he has written over 50 books including the best-sellers The Arimathean, Every Number is Lucky to Someone and We Are All Characters.
See More Articles From Sean Leary
Tagged: A Christmas CarolauditionsCountryside Community TheatreDanny Whitelocal theatreSean LearyTristan Tapscott