Sean Leary November 23rd, 2020 Sean Leary, Rock Island, Moline, Family, Events, Davenport, COVID-19, Columns, Business, Bettendorf, Articles Share:
We all want things to get back to normal as quickly as possible. We look at other countries like Australia and New Zealand and they’re already having big sporting events and concerts and leading normal lives again.
I want the same. I want to have my jobs and income fully back, I want to be able to go out and see friends, I want my son and his friends to be able to play soccer games again, I want my friends who own businesses to be able to open them up and keep them open. 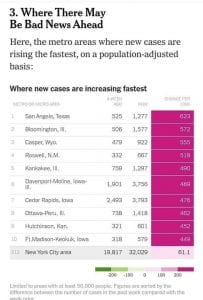 The Quad-Cities has moved up to number 6 nationwide on the worst covid hot spots in the entire United States.

And that can happen here, but it’s going to take some sacrifice and some work.

And now’s the time to do it.
We’re on a precipice here with the one-two-three punch of Thanksgiving, Christmas/other winter solstice holidays, and New Year’s Eve coming up.
Now, this can go a couple of ways.
Worst case scenario, millions of people continue to not care, don’t wear masks, don’t act responsibly, and generally go nuts the same way the folks did when thousands of them went to the Sturgis Motorcycle Rally.
And, what happens then is what happened in the aftermath of the Sturgis Motorcycle Rally, which led to North and South Dakota leading the entire world in covid cases and deaths per capita right now.
That’s what could happen over the next two months, and if that happens, that’ll spill over into the beginning of 2021, and we’ll be in a horrible spot early next year going into the spring, making things even worse than they were last spring.
Which likely means no school, businesses closed, no spring sports, and no concerts or anything likewise until late summer at the earliest.
Or, we could go another way.
People can chill out on the next two months and be smart, safe, and responsible. Don’t go out and get nuts on Blackout Wednesday and Black Friday. Be responsible getting together with families for Thanksgiving and holiday celebrations. Don’t go out and get hammered and turn New Year’s Eve into a super-spreader event.
Yeah, yeah, I know it sucks. I’m not a big fan of it either.
But I’m a bigger fan of that than I am of being in lockdown through early 2021 and into the spring and still dealing with this mess into summer of next year.
The choice is ours.
We’ll see what the future holds.
Advertisement