The Ghost of Vaudeville is fading away, at least for now. 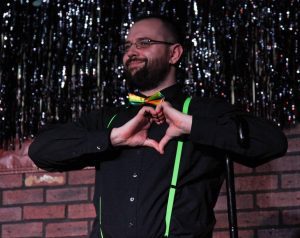 After a decade as the emcee and co-leader of the Bottoms Up Burlesque Troupe, Joshua Kahn, “The Ghost of Vaudeville,” is doing his last shows this weekend, before taking an extended sabbatical to celebrate the birth of his child and to spend time with his wife and family.

Bottoms Up announced the move about a month ago on social media, after Kahn had announced it live at their late March shows. They posted:

“Well the cat is out of the bag, and the Ghost of Vaudeville is leaving the building. After dedicating 10 years of his life to hosting Bottom’s Up, our beloved Josh Kahn will be retiring, after one final show. Though we are greatly saddened by his departure, we are so excited for him to embark on his newest adventure, parenthood. We wish him all the love, success, and sleep in the world, as he will need it. We know his daughter will be so lucky to have such a cool dad, and that he will never let her forget it. If you’d like to be a part of his farewell to the stage, make sure you get tickets now for his final show, Masquerade, on April 30th or May 1st. We promise it’ll be a night to remember forever.”

To hear Josh talk about his time with BU, his last show, and more, listen in to our conversation in the latest episode of our podcast, QCUncut, on QuadCities.com.

Sean Leary
Sean Leary is an author, director, artist, musician, producer and entrepreneur who has been writing professionally since debuting at age 11 in the pages of the Comics Buyers Guide. An honors graduate of the University of Southern California masters program, he has written over 50 books including the best-sellers The Arimathean, Every Number is Lucky to Someone and We Are All Characters.
See More Articles From Sean Leary
Tagged: Bottoms Up BurlesqueDistrict in Rock IslandJosh KahnJoshua KahnmasqueradeSpeakeasy