A message from Tenacious D: “Donald Trump has proven to be the most divisive, corrupt and dangerous President in the modern history of this country, and we simply cannot stand for another four years of his administration! Now is the time to elect a REAL leader!” With that in mind, Tenacious D has put together The Purple Nurple Tour – Twisting Hard To The Left! – including their first Quad Cities appearance in 18 years on Friday, September 25 at the Adler Theatre in Davenport. Show time is 8:00 p.m. Special guests will be Wynchester. Reserved seats ($79.50 and $65.00) become available on Friday, March 6 at 10:00 a.m. and can be purchased online at Ticketmaster.com or in person at the Adler Theatre Box Office (136 E. 3rd St.).

The run of shows, which focuses on swing states, sees everyone’s favorite band (comprised of Jack Black and Kyle Gass) partnering with 46 for 46 to promote voter registration and overall civic action through music.

Tenacious D also recently announced that they will be adding the final piece to their Post-Apocalypto universe: THE GRAPHIC NOVEL, out this September via Fantagraphics.  Pre-order the book HERE! 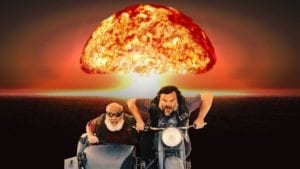 Post-Apocalypto the graphic novel will add to 2018’s brilliant releases of the same epic tale:

Tenacious D in Post-Apocalypto – THE FILM – is an original, six-part animated feature from the minds of Tenacious D. Each frame of every chapter was hand-drawn by Black himself, with every character voiced by Black and Gass.

True to the title, the tale of Post-Apocalypto finds Tenacious D thrust into a world of complete and utter destruction following the drop of an atomic bomb.  Surviving the attack in classic cinematic fashion (a good old imperishable 1950’s refrigerator), the duo quickly learns that new forms of evil have spawned from the blast.  One thing becomes apparent — for humanity to prevail, Tenacious D must save the world.

Sean Leary
Sean Leary is an author, director, artist, musician, producer and entrepreneur who has been writing professionally since debuting at age 11 in the pages of the Comics Buyers Guide. An honors graduate of the University of Southern California masters program, he has written over 50 books including the best-sellers The Arimathean, Every Number is Lucky to Someone and We Are All Characters.
See More Articles From Sean Leary
Tagged: Adler TheaterDavenportJack Blackkyle gasslocal concertspost-apocalyptoTenacious D