The new Christmas-themed musical at Mockingbird on Main in downtown Davenport is the ultimate stocking stuffer – not a major present in any way, but a sweet, silly, delicious trifle in more ways than one.

When a huge snowstorm hits and the star-studded cast of a 1953 radio show can’t make it into the studio, those who are trapped inside the studio — the janitor, the writer, the assistant station manager and the young frazzled producer — must take over and see that show does indeed go on.

Performed without intermission (running less than an hour), “Deck the Halls” is a frantic, fast-paced, family-friendly holiday musical featuring such popular hits as “Jingle Bells,” “Silent Night,” “We Wish You A Merry Christmas” and a new version of “O Little Town of Bethlehem.” 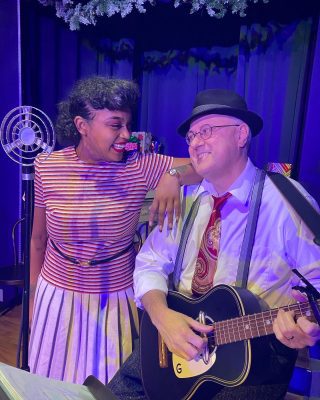 Kira Rangel and Doug Kutzli in “Deck the Halls”

The show within a show stars Doug Kutzli (as Doc, the writer); Gary Talsky (as Elias, the janitor); T.J. Green (as Roy, the producer); and Kira Rangel (Loretta, the assistant station manager). “Deck the Halls” was written by Mockingbird founder and co-owner Tristan Tapscott (who also directs) and features folksy, casual musical arrangements by Kutzli, who most recently teamed up on Circa ‘21’s virtual movie musical, “Big Rock Candy Mountain.”

Last winter, that similar-style show was filmed at the Circa ’21 Speakeasy (featuring eight mask-less cast members); the 2014 musical also was affectionately written and directed by Tapscott, and both are anchored by the solid Kutzli on guitar, vocals, common sense and dependability.

Before the holiday special within the Kansas City radio station setting starts, Doc convinces Loretta to sing (“If you tell anybody, it never happened,” the sassy Rangel says.). In her sharp, no-nonsense humor, powerful singing voice, and bright red lipstick, Rangel steals the show with every scene she’s in. 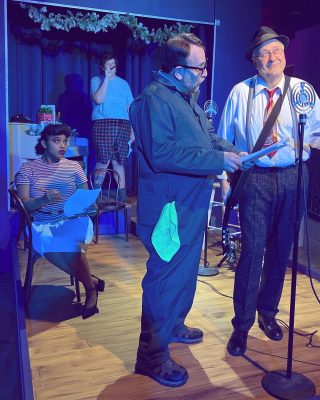 Her first “O Holy Night” is low, soulful and rhythmic (rather than overly reverent); “Silent Night” is strong and beautiful, and her “It Came Upon a Midnight Clear” is brisk and wonderful (including Kutzli on harmony in the second verse).

Though the characters have scripts in their frenzied radio show, much of the rag-tag proceedings feels improvised, and the harried foursome is forced to make it up as they go along. Green as Roy appears in T-shirt and boxer shorts, because he explains that the snow was so heavy he had to get out of his clothes.

Green is a very big guy with an even bigger personality, which he deploys to great effect as a famous, full-of-himself actor, Francis Fowler. His “I Heard the Bells on Christmas Day” is appropriately overly dramatic and despairing. Later, Green does a down-home version of “Joy to the World,” also making up a verse after he tosses the script. He sort of gives the impression of what the Kool-Aid Man would sound like if he sang and acted. It’s also a tasty treat. 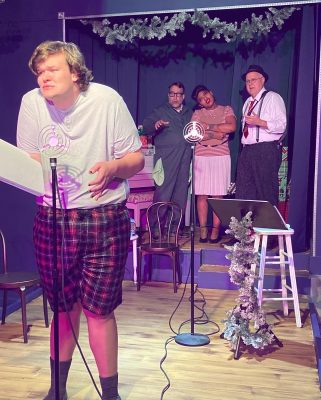 Green’s wild, demonic reading of “Twas the Night Before Christmas” becomes a frenzied, fever dream – incorporating bits of “War of the Worlds,” “The Wizard of Oz” and “Hamlet.”

Talsky, by contrast, is reliably sane, understated, and relatable. His roles include Santa; playing one of two Italian goombas (with Kutzli), tossing off bad puns and jokes; and the newspaper editor who reads the classic, touching response to the letter from Virginia who asked if Santa was real.

Kutzli also shines as Preston Wyoming (the Southern-infused, good-natured cowboy crooner). He reprises “House of the Rising Sun” from “Big Rock Candy Mountain” by affixing that melody to the words of “O Little Town of Bethlehem,” in waltz time, and it works.

The radio quartet survive their disaster with heart and humor, and while relaxing after the show, Doc remarks: “That’s what the holidays are all about – a little bit of chaos, a little bit of fun and a whole lot of love.”

“The show is all fun and fluff and is the perfect getaway from the outside world,” Mockingbird co-founder Savannah Bay Strandin said before the opening. Creator Tristan Tapscott added, “We aren’t trying to reinvent any wheels or reimagine what theatre can do; we just wanted to bring something fun and happy to the landscape!”

Jonathan Turner
Jonathan Turner has been covering the Quad-Cities arts scene for 25 years, first as a reporter with the Dispatch and Rock Island Argus, and then as a reporter with the Quad City Times. Jonathan is also an accomplished actor and musician who has been seen frequently on local theater stages, including the Bucktown Revue and Black Box Theatre.
See More Articles From Jonathan Turner
Tagged: big rock candy mountainCirca 21 Dinner Playhousedeck the hallsDoug Kutzligary talskykira rangelmockingbird on mainsound of musictj green