The Quad City Storm is thundering into their final games of the regular season with two goals in mind; making the playoffs and reaching the $100,000 mark in their donations to the community.

Currently the Storm are in a four-way battle for one of the final two playoff positions in the SPHL.  The action off the ice is just as exciting for the Storm. With four specialty jersey auctions remaining this season, the goal of giving over $100,000 back to the community could become a reality. 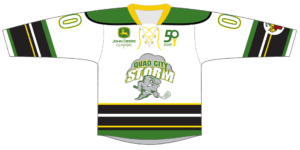 The Quad City Storm made community giving a focus when the team started last season. At every Storm game a local nonprofit receives money from the Chuck-a-Puck sales, organizations can bring a group and keep part of their ticket proceeds and on big game nights local nonprofits receive the net proceeds from our jersey auctions.

The first of the four final jersey auction happened this past weekend, as the Storm was wearing three Marvel jerseys on the ice at the same time – Captain America, Ironman and Black Panther. The jerseys were then auctioned live post-game with the money going to the St. Ambrose Dance Marathon.

The other three specialty jersey auctions remaining are:

March 27 – Salute to Labor and our Country-Raising money for

Alternatives for the Older Adult

For more information and to get your Storm tickets, see www.quadcitystorm.com!

Sean Leary
Sean Leary is an author, director, artist, musician, producer and entrepreneur who has been writing professionally since debuting at age 11 in the pages of the Comics Buyers Guide. An honors graduate of the University of Southern California masters program, he has written over 50 books including the best-sellers The Arimathean, Every Number is Lucky to Someone and We Are All Characters.
See More Articles From Sean Leary
Tagged: brian rothenbergerGwen Tombergslocal charitylocal hockeylocal sportsQuad City Storm