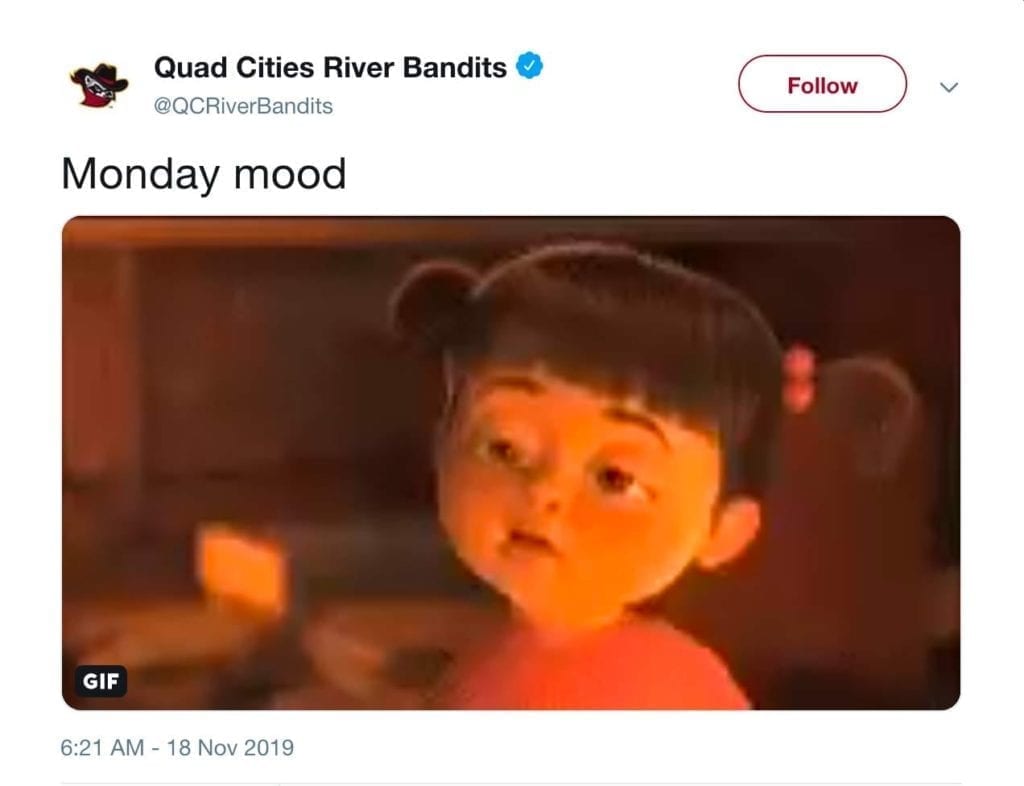 With the dark cloud of potentially having their major league affiliation to the Houston Astros cut, leaving them with an uncertain fate, the Quad City River Bandits officials remained mum on Monday, releasing only a cryptic post on Twitter.

The GIF, captioned “Monday mood,” featured a little girl from a Disney film with an exasperated expression on her face.

According to an article published Saturday in the New York Times, a Major League Baseball proposal has been forwarded that would cut ties between 42 minor league teams and their major league partners. The Quad City River Bandits, a minor league affiliate of the Houston Astros, are on that list.

MLB officials are positing that the moves are to streamline the developmental leagues and to eliminate those whose facilities and quality are not up to their standards, according to the report. The report also says that one of the teams leading the elimination proposal is the Houston Astros. The River Bandits are a minor league affiliate of the Astros. The Astros are already embroiled in another controversy, over cheating, with the MLB.

The River Bandits aren’t the only local team affected, as the Clinton Lumber Kings and the Burlington Royals are two other Iowa teams on the blacklist.

If eliminated, the teams, including the River Bandits, could continue as independent entities and play other independent teams, or form a league of their own. There are already six major independent baseball leagues active in the minors. The American Association is the biggest Midwest league, including such teams as the current champion Kansas City T-Bones.

However, without the major league baseball affiliations, the teams, including the River Bandits, could face a crisis in funding, losing their financial ties to the majors. It could also negatively impact advertising revenue and quality of play. Independent teams are typically populated by players that were not drafted or were cut from minor league and major league rosters, rather than the prospects, some blue chippers, that have strode the field for the Bandits over the years.

Sean Leary
Sean Leary is an author, director, artist, musician, producer and entrepreneur who has been writing professionally since debuting at age 11 in the pages of the Comics Buyers Guide. An honors graduate of the University of Southern California masters program, he has written over 50 books including the best-sellers The Arimathean, Every Number is Lucky to Someone and We Are All Characters.
See More Articles From Sean Leary
Tagged: American AssociationbaseballBurlington BeesChattanooga LookoutsClinton LumberKingsHouston AstroIndependent TeamsJoe KublyMidwest LeagueMILBMLBMLB AffiliatesQC River BanditsQuad Cities