Storm forward Connor Fries has been named the SPHL’s Warrior ‘Player Of The Week.’  It is the first player of the week honor for a Storm player in franchise history.  Per the SPHL: 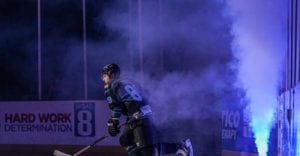 “The Southern Professional Hockey League (SPHL) today announced that Connor Fries of the Quad City Storm was named the Warrior Hockey/SPHL Player of the Week for December 30-January 5.

Fries scored six goals, including his first professional hat trick, added two assists and was +7 as the Storm picked up five of a possible six points last week, going 2-0-1.

The Centerville, MA native closed out 2019 with a bang as he recorded the first hat trick in Storm history and added an assist in leading Quad City to a 5-2 win over Peoria on New Year’s Eve. Fries continued his hot streak into 2020 as he scored twice in a 59-second span in the first period and assisted on Quad City’s final goal to help lead Quad City to a 6-3 win over Huntsville on Friday. Fries closed out his week by scoring Quad City’s only goal in a 2-1 overtime loss to the Havoc on Saturday.

Fries was signed by Quad City on November 11 after playing two games with Peoria earlier in the season and currently leads all rookies with a +15 rating. Before turning pro, Fries played four years at New England College where he earned NCAA III (NEHC) Second Team All-Conference honors his senior season (2018-2019).”

The Storm return to the TaxSlayer Center this weekend to take on the Peoria Rivermen in the #ColdWarOn74.  Tickets are available online at QuadCityStorm.com.

Sean Leary
Sean Leary is an author, director, artist, musician, producer and entrepreneur who has been writing professionally since debuting at age 11 in the pages of the Comics Buyers Guide. An honors graduate of the University of Southern California masters program, he has written over 50 books including the best-sellers The Arimathean, Every Number is Lucky to Someone and We Are All Characters.
See More Articles From Sean Leary
Tagged: connor frieslocal hockeylocal sportsQuad City StormSPHLwarrior player of the week