Led by the core of the now-disbanded Mid America Premier youth soccer squad, augmented by various players from the likewise defunct Moline United, the new Quad-Cities Rush continued their dominance at the U11 youth soccer level, remaining undefeated after three tough matches against some of the best soccer teams in Illinois and Iowa this weekend.

The Rush, ranked fourth in the state according to the latest GotSoccer rankings for u11 teams, began the weekend 5-0-0, but had a tough mountain to climb on Saturday with back-to-back games at 3 and 4:30 p.m. in the scalding 95-plus-degree heat.

The team started just as hot as the temperatures, facing off against local rivals Q-C Strikers, who had last lost to Mid America Premier in a thrilling penalty kick shootout in the championship of the Rivers Edge Winter League earlier this year. However, the Rush wasted no time in exerting their dominance. Just a few minutes in, Jackson Leary intercepted a clearing attempt from the Strikers goalie and blasted a shot from outside the 18 past the keeper’s outstretched grasp to put the Rush up 1-0. Quick goals by Elijah DeLaCruz, Leary, Jack Wendt and Aydin Caras-O’Neal put the Rush up 5-0 at half, and the team cruised to an 8-1 win that featured hat tricks by DeLaCruz and Leary. 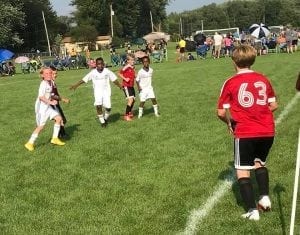 Then came the even bigger test.

In over 100 degree temperatures and oppressive humidity, playing two straight hours of soccer with a little break between was going to be tough, but it was made even more so playing against one of the top-five ranked teams in Iowa, North Scott Nitro.

Nevertheless, the Rush gutted it out and in a largely defensive struggle, pulled ahead 3-2 going into the final minutes on goals from DeLaCruz, Wendt and Connor Wehr off assists from Leary and Jonas Cortez and incredible goalie work from Sayden Williams girded by fantastic defensive play from backs Adam Jack, Adam Donaldson and Paul Dzudu.

As the final minutes approached, it was obvious the Rush were on fumes, sweaty and red-faced, giving the last of their energy, and North Scott, which hadn’t played prior to this game, and had a deeper bench available, were far more fresh. Nitro attacked viciously attempting to knot up the game, and managed to tie with just a few minutes left.

In the last two seconds, Nitro ripped off one final shot, but Williams stretched out and made a phenomenal save to secure a well-earned draw. As the last whistle sounded, the Rush starters collapsed and remained on the sidelines downing Gatorade and recovering from two battles hard-fought. 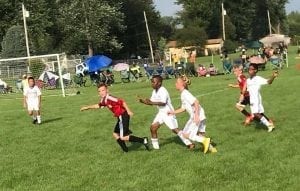 And a bigger battle Sunday loomed, against local rivals East Moline, ranked seventh in the state and featuring some of the most talented players in the area outside of the Rush roster. Well-coached and possessed of fantastic goalie play, a driving offense and a tough motor, East Moline stood as a formidable foe. There’s been a strong respect and friendly rivalry between the two squads, as evidenced by the fact that DeLaCruz, Leary and Cortez had just guest-played with East Moline the week prior to team up to win the Crystal Lake Cup near Chicago, and many of the players are friends and amicable but strong competitors.

Through the first third of the game, the two teams exchanged shots but remained drawn at 0-0, with the defenses and goalies coming up big. Dzudu, Jack, Donaldson and Connor Wehr were huge in the backfield for the Rush, closing down the potent attack of East Moline’s offensive stars, Elijah Nache and Andres Segovia.

Then the game turned on one breakaway.

Rush defensive midfielder Jonas Cortez cleared the ball from his zone up just short of the midway line to attacking midfielder Jackson Leary. Leary deked past a midfielder to find space up the corner, then deked past a second defender to cut back to the middle, then cut again to create space between him and the East Moline sweeper as the two of them streaked towards the goal, Leary just a step or two ahead of the defender right on his shoulder, who was keeping an arm out on him to push him off line of the goal.

East Moline’s all-star goalie positioned himself and advanced to brace for the shot on the short side of the goal as Leary and the defender sprinted just inside the 18, but instead of pulling back his leg for that half-second to take a shot off the top or side of his foot, thus allowing the defense to possibly put a body on him to alter it, Leary surprised both of them by staying in stride and toeing the shot straight on into the top bins on the far end of the goal, just off the outstretched fingers of the goalie.

And it was 1-0 at the half, with both sides gearing up for a war in the second. 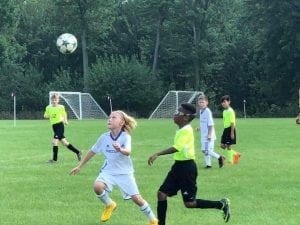 East Moline came out with a furious attack to start, rocketing shots at Rush goalie Sayden Williams, but magnificent defensive plays from Paul Dzudu and Connor Wehr, a beast on defense throughout the game, kept the high-octane offensive forces of East Moline at bay, allowing the front four of the Rush to keep up their own counter-attack. After sniper shots from Jack Wendt and Elijah DeLaCruz were saved by the tough East Moline goal, the Rush got a break on a corner kick.

Cortez lofted a perfect corner into the box and Leary finished it with a flying knee, the ball never touching the ground, as it found the net to give the Rush a 2-0 lead.

East Moline, true to their nature as champions and seeking to remain undefeated, battled back, drawing closer 2-1 on a fantastic shot from Segovia that just broke past an outstretched Williams.

But the Rush quickly answered.

Taking a sublimely lofted pass up from Cortez on the right wing, forward Elijah DeLaCruz deked out one defender right, took the other defender left, cut back, then, with a third defender on his shoulder, launched a shot perfectly past the outstretched glove of the goalie into the far bins of the net, giving the Rush the final tally of 3-1. Their defense held, and it was an undefeated weekend for the Rush and a well-deserved retention of their top five ranking in the state.