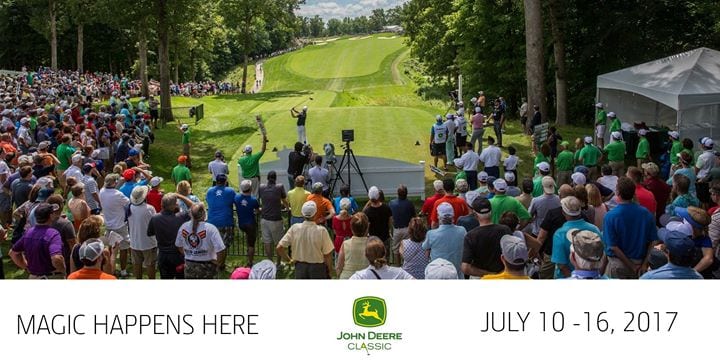 It’s time to tee it up again this week for the John Deere Classic, running through July 16 at TPC Deere Run, 3100 Heather Knoll, Silvis.

More than 20 players who competed in last week’s PGA Championship have committed to play in the tournament. The John Deere Classic was honored to be named the 2016 Tournament of the Year by the PGA TOUR and has a long history of providing some of the most magical and memorable finishes in golf.

Many recall Steve Stricker’s three-peat of championships from 2009 – 2011. Cedar Rapids native, Zach Johnson reigned victorious in 2012 in what he refers to as his 5th major. 2013 provided a playoff that would change the game on TOUR when Jordan Spieth won his first PGA TOUR event at the age of 19 and then went on to win here again in his phenomenal 2015 campaign. Our 2016 champion, Ryan Moore, clinched the final point needed to bring the Ryder Cup home for the Americans.

Who will hoist the bronze deer trophy in 2017?

For more information on tickets and the event, see www.JohnDeereClassic.com.

Sean Leary
Sean Leary is an author, director, artist, musician, producer and entrepreneur who has been writing professionally since debuting at age 11 in the pages of the Comics Buyers Guide. An honors graduate of the University of Southern California masters program, he has written over 50 books including the best-sellers The Arimathean, Every Number is Lucky to Someone and We Are All Characters.
See More Articles From Sean Leary
Tagged: Billy Hurley IIIBrian StuardDaniels SummerhaysFreddie JacobsonJamie DonaldsonJason KokrakJohn Deere ClassicJohn SendenJon CurranKevin NaKyle ReifersMatt JonesPatton KizzirePGARobert StrebRyan MooreTPC Deere RunU.S. Ryder CupVaughn Taylor