After a thrilling 7-6 championship win on penalty kicks in the Armed Forces Cup, the U11 East Moline Silvis Soccer Club Spartans are definitely looking like a team to be reckoned with. 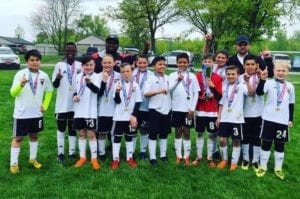 The Spartans rose to being ranked 15 in the state in the latest GotSoccer ratings after the tournament gold, knocking out Peoria FC and the Q-C Rush in the prelims before taking on and taking out the Q-C Strikers in an electrifying final game.

The Spartans, missing two of their starters, leading scorer and striker Elijah DeLaCruz and goalie Gavin DeRudder, dug deep and played tough throughout the weekend, with coach Anthony Nache smartly switching players around to cover the gaps and stay on top. Xavier Marolf went back from sweeper to goalie, and Baylor Smith and Jackson Leary were switched out from their usual spots of starting defense and starting midfielder, respectively, and Smith and Leary alternated between sweeper and striker spots to anchor the key positions. Joined by Jonas Cortez, Eli Nache, Izzy Bailey and Connor Wehr back on defense, the Spartans were able to shut down their opponents, outscoring them 6-3 going into the final. 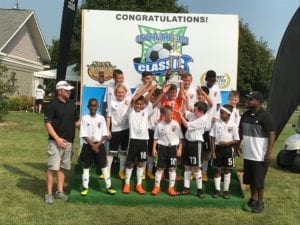 And what a final it was!

The Strikers played a rough, physical game trying to throw the talented Spartans off their spots, but the Spartans stood their ground and played just as tough

The Spartans have undergone some growing pains this spring, after the arrival of four top talents in Elijah DeLaCruz, Jackson Leary, Jonas Cortez and Connor Wehr. The four players had previously been with the last two Quad-Cities teams ranked number one in the state, and with the addition of all the players, the group has taken a while to gel and find its chemistry, but the team seems to have hit its stride, with a second place finish against three other teams ranked in the top 15 at the Legacy Cup in O’Fallon, just outside St. Louis, and its gold medal at the Armed Forces.

But Quad-Cities Strikers didn’t let them have that trophy without a fight. 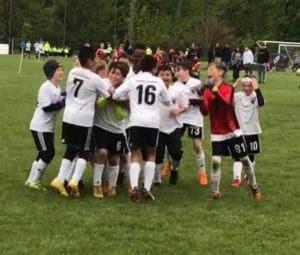 Strikers are always tough competition, with a combination of talent and rough, physical play that matches up well with the toughness and speed of the Spartans, and predictably, the final played that out, with a brutal slugfest between the two teams, with each fighting for goals and ground and battling to a standstill much of the time.

The Spartans ripped off to a 2-0 lead at halftime, but the Strikers came back with two scores of their own in the second half, sending it to overtime. Each team had its chances in the OT, with Jordan Marshall barely missing a game-winner off the top post with just a minute to play, but it ended in a draw, and it was time to line up for one of the most thrilling moments in sports – the penalty kick shootout.

In a PK shootout, each team begins with five selected players. The players from each team take turns shooting at the net with the opposing goalie trying to stop them. The team with the most goals out of those five ends up winning – although in the event of a tie, it goes to a second five players and they shoot until they win.

The Spartans picked their winning hand and rolled them out.

So did the Strikers.

First shot: Spartans’ Eli Nache fires it to the left side, SCORE!

Spartans’ Jordan Marshall pounds it top bins to the left and SCORE!

The Strikers player lines up his shot, as Spartans goalie Xavier Marolf stretches his arms at the ready to pounce at the strike… the player leans back, kicks, and… BLOCKED BY MAROLF!

Score 4-4 Spartans, with one player left for EMSSC!

Jonas Cortez places the ball. Lines up his shot. Steps back a few paces. Works up a good stride… and BOOM, HITS IT BOTTOM RIGHT, SCORE! A 5-4 PK WIN, AND A CHAMPIONSHIP FOR EMSSC!

And, with the points gained from the title, a move into the top 15.

Sean Leary
Sean Leary is an author, director, artist, musician, producer and entrepreneur who has been writing professionally since debuting at age 11 in the pages of the Comics Buyers Guide. An honors graduate of the University of Southern California masters program, he has written over 50 books including the best-sellers The Arimathean, Every Number is Lucky to Someone and We Are All Characters.
See More Articles From Sean Leary
Tagged: Armed Forces CupEast MolineEMSSC Spartanslocal soccerMoline