Sean Leary June 10th, 2020 Rock Island, Moline, Entertainment, East Moline, Davenport, Bettendorf, Articles Share:
Spike O’Dell, former WGN and Quad City native and radio personality, will be the guest on the hour-long podcast Weekly Wilson on Thursday, June 11th, from 7 to 8 p.m.
The hour-long podcast hosted by author Connie (Corcoran) Wilson, is carried by the Bold Brave Media Global Network and Tune-In Radio, Channel 100. [While the site says it is on at 8 p.m., that is Eastern Time and the “live” call-in format airs from 7 to 8 p.m., our time]. The hour-long show is a “live” call-in format, with listeners able to call in with questions at 866-451-1451. The taped shows are later posted on WeeklyWilson.com for listeners who missed the original airing. 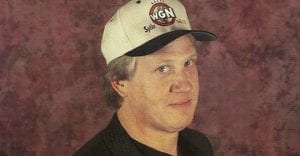 Spike O’Dell, whose father was East Moline’s Chief of Police, began his career in radio at WEMO-AM in East Moline in 1976, moving on to a part-time job at WQUA-AM (now WXFN Sports) and, in 1978, KSTT-AM, where he dubbed the street outside KSTT’s studio “Twinkie Boulevard.”
Spike ruled the Quad City airwaves until 1987, with a brief stint at WBT-AM in Charlottesville, North Carolina.
In July of 1987 Chicago’s Dan Fabian of WGN hired Spike away from the Quad Cities and he was on the air in Chicago from 1987 until December 12, 2008, when he retired young (55) and moved to Nashville with his family. His parting comment at his last show from the Metropolis Theater in Arlington Heights: “It was a good ride.”
Spike was voted Billboard Magazine’s Top 40 Personality of the Year for a medium market in 1987, and also received an award for Best Radio Afternoon Show in 1999. In addition to being a member of the UTHS Hall of Fame (2000), Spike was awarded the James A Lovell Failure Is Not An Option award in 2003. In 2014, he became a member of the WGN Radio Walk of Fame, paying tribute to his successful 22-year career at WGN in Chicago.
Now retired, he and his family live in Nashville.
You can find out what he’s been up to since 2008 by tuning in to Weekly Wilson on Bold Brave Media Global Network and Tune-In Radio on Thursday, June 11th, at 7 p.m.
Advertisement

Sean Leary
Sean Leary is an author, director, artist, musician, producer and entrepreneur who has been writing professionally since debuting at age 11 in the pages of the Comics Buyers Guide. An honors graduate of the University of Southern California masters program, he has written over 50 books including the best-sellers The Arimathean, Every Number is Lucky to Someone and We Are All Characters.
See More Articles From Sean Leary
Tagged: Connie WilsonpodcastsSpike O'Dellweekly wilson