Home › Articles › Cities › Rock Island › Show Some Self Control As You Watch This Week’s Video You Deserve!

Show Some Self Control As You Watch This Week’s Video You Deserve!

So, I wrote Kristy back with a Very Special Question of my own: Who are you and how did you get this number? 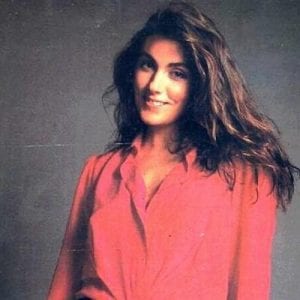 Laura Branigan. Don’t remember her being this much of a hottie, but, here we are. Guess so.

And after she answered those two questions (President of the ‘Q-C Firestarters’ Matchbox 20 Fan Club, and, Arby’s bathroom wall, natch), I said, “Now, NOW, and ONLY now, are you ready for me to impart this special video onto you.”

The video I’m talking about, OF COURSE, is “Self Control,” by Laura Branigan.

You probably remember Branigan more for her biggest hit in the U.S., “Gloria,” which peaked at #2 in 1982, and launched her to stardom.

However, it was actually “Self Control” which was her biggest international hit, topping the charts in countries all over the world in 1984, including #1 in Germany, Austria, Canada, South Africa, and Italy, and hitting #4 in the U.S., propelling her third album of the same title to platinum status. 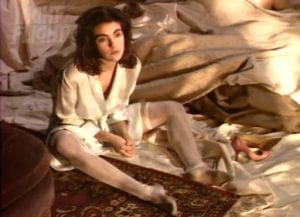 Laura Branigan contemplating the shirtless moobs guy in the mask. As are we all.

Anyway, Raf’s version was really successful even without being as bizarrely sexy as Branigan’s. It was a massive hit worldwide in two dozen countries, as was Laura’s (meaning Raf was really cleaning up on the songwriting royalties), and in Italy and Germany, both versions were in the top five at the same time and actually switched spots on top of the charts. Wacky!!!

No doubt, a big part of Branigan’s success was due to the unusual yet undoubtedly creative and striking video. Now, in watching this video, you might say to yourself, “What freakin’ weirdo came up with this thing? This is kinda creepy and strange!”

Well, there’s a reason for that, because the freakin’ weirdo who came up with the concept and directed the clip was none other than Oscar-winner William Friedkin (The French Connection, The Exorcist). So, ya know, on the plus side, at least Branigan got to look all hot and steamy in the video instead of puking up pea soup and having her head spin around.

And by now your head’s probably spinning around from all my yappin’. So, here’s the Video You Deserve, “Self Control,” by Laura Branigan, as requested by Kristy, and as secretly requested through the matrix by every single damn one of you…

Sean Leary
Sean Leary is an author, director, artist, musician, producer and entrepreneur who has been writing professionally since debuting at age 11 in the pages of the Comics Buyers Guide. An honors graduate of the University of Southern California masters program, he has written over 50 books including the best-sellers The Arimathean, Every Number is Lucky to Someone and We Are All Characters.
See More Articles From Sean Leary
Tagged: '80s videoscheesy videosfunny videosglorialaura braniganrafself controlthe exorcistthe french connectionvideo you deservewilliam friedkin