Fifteen months after their first and last live shows, one of rock music’s royal families is more than ready to rock again at Davenport’s Adler Theatre Thursday, June 3.

The Nielsen Trust – made up of Cheap Trick guitarist and main songwriter Rick Nielsen, sons Miles (guitar) and Daxx (drums), and Miles’ 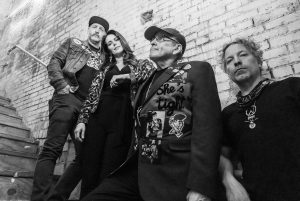 wife Kelly Steward (vocals) – will perform at 7 p.m. on a bill with Nick Perri & The Underground Thieves, and opening act All Sweat Productions (of the Quad-Cities).

As live music has kicked back into gear in a big way locally and globally, Miles Nielsen, 45, is thrilled to be back playing for in-person audiences.

“I think it’s going to be fun, as long as people show up and I’m just excited to get back on the road,” he said in a recent interview. “I just got back from Arizona out there, a couple of shows, just the two of us, and people are just ready to get to get back to feeling that energy with people, 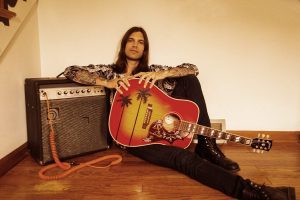 Nick Perri and his Underground Thieves will perform June 3.

and feel the energy of live music in a room. For sure, I’m excited about that.”

Cheap Trick (best known for hits “I Want You to Want Me” and “Surrender”) formed in 1974 in Rockford, Ill., where Miles still lives. His dad Rick is 72 and Cheap Trick is back on the road starting July 2 in Fort Dodge, Iowa – and later this summer have several concert dates with Rod Stewart. The Nielsen Trust is kicking off its 13-date June tour at the Adler.

“They’re going to be busy,” Miles (who fronts his own rock band, The Rusted Hearts) said of Cheap Trick. “So that’s kind of like the beautiful 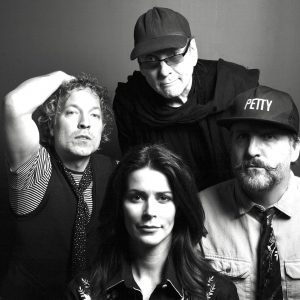 window of the tour that we have. The three weeks in June that we’re doing shows are going to be the only three weeks that we’re playing, probably up until some indoor rescheduled for December.”

The Nielsen Trust only got to play two shows together, in March 2020 in the Wisconsin Dells, before Covid shut down touring. Their first tour included a shelved March 26, 2020 date at The Rust Belt in East Moline. Miles Nielsen said the family band was her mom’s idea.

“She said, when your dad’s off the road, you know, let’s get together and have a band,” he said.

“Yeah, yeah, it sounds exactly like what he’d want to do when they’re off the road from 140 dates a year, but everybody was into it. And we’ve been having fun doing it.”

“It’s meant to be fun, you know, it’s not meant to be going out front for the record deal,” Nielsen said. “We’re going out and to have the opportunity to play with your dad and my brother and my 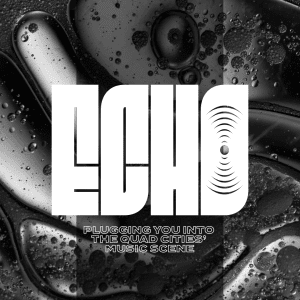 This article is part of QuadCities.com’s partnership with the new local music website The Echo. Check them out at https://theechoqc.com.

Compared to The Rusted Hearts – which last played the Q-C in July 2019 at East Moline’s River Bend Park – the family band is more straight ahead rock/pop, and incorporates a bunch of songs from the different artists’ repertoire. Daxx has been Cheap Trick drummer since 2010, and Miles’ wife is a singer/songwriter in her own right. The Rusted Hearts (also veterans of Davenport’s Redstone Room and former Raccoon Motel) have a more eclectic sound, including ‘60s soul and influences as diverse as Otis Redding classics and Jellyfish power pop. Over the pandemic, Nielsen took the time to work on his songwriting and cherish time with his family – which includes a 20-year-old son, and two daughters, 17 and 15.

“If we just look for the upside in most situations, we joke all the time, but I’ve never had this much time with our teenagers as we did this past year,” he said. “That was a blessing and now we’re getting back to it, on the road.”

The Rusted Hearts toured in Europe in fall 2019, to promote their last album, then did about five stateside shows by March 2020.

“We really haven’t had a chance to even tour on that record,” Nielsen said. “So it’s just weird because now that record will be almost two years old and we’ve never really toured on it.”

Jonathan Turner
Jonathan Turner has been covering the Quad-Cities arts scene for 25 years, first as a reporter with the Dispatch and Rock Island Argus, and then as a reporter with the Quad City Times. Jonathan is also an accomplished actor and musician who has been seen frequently on local theater stages, including the Bucktown Revue and Black Box Theatre.
See More Articles From Jonathan Turner
Tagged: Adler TheaterAdler Theatremiles nielsenquadcities concertsRiverCenterthe nielsen trust