Rock Island’s Circa ’21 Dropping Some Great New Events In The Coming Weeks!

As Circa ’21 awaits word from the Illinois Governor’s office on when it can reopen, the theater is not sitting back and waiting!  Circa ’21 is set to debut three new shows in the secondary theater, The Speakeasy. 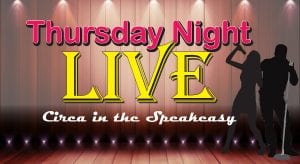 Tickets for all three shows must be reserved online at thecirca21speakeasy.com or circa21.com.  Phone reservations are not accepted for the shows.  The theater requires the use of face coverings to all shows and will be taking everyone’s temperature upon arrival.

Because of COVID, seating capacity is limited to 50 people per show so reserve early! Since COVID restrictions prohibit smaller parties, only reservations for parties of 4 and 6 will be accepted.  The Speakeasy does offer pizza, nachos and other snack items, and, it also offers a full bar.

Entertainment and variety like only Circa ’21 can do! Every Thursday night, area performers, Bootleggers and Circa ’21 favorites will be performing for you live on the Speakeasy stage! Show changes weekly, so come often and enjoy a great night of entertainment! Show is open to fans of all ages. Doors open at 6 and the show begins at 7 p.m.. Circa ’21 is planning a wide range of entertainment in these shows.  Each

week will have different performers.  If you attended the “Music On The Marquee” show a few weeks ago, you’re going to love this!

Come spend Thursday nights with Circa ’21 and be entertained by some of the most talented performers in the Quad Cities! 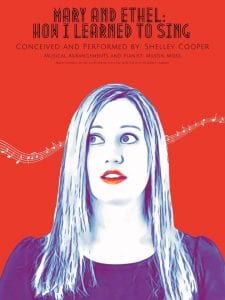 women and vice versa.  You’ll hear songs performed like you’ve never heard them before! Broadway Backwards began as a grassroots concert in NYC in 2006.  It has gone on to become a very popular cabaret since it first show.

Sean Leary
Sean Leary is an author, director, artist, musician, producer and entrepreneur who has been writing professionally since debuting at age 11 in the pages of the Comics Buyers Guide. An honors graduate of the University of Southern California masters program, he has written over 50 books including the best-sellers The Arimathean, Every Number is Lucky to Someone and We Are All Characters.
See More Articles From Sean Leary
Tagged: Brett Hitchcockbroadway backwards: a miscast cabaretCirca 21 Dinner PlayhouseDenny Hitchcocklocal theaterlocal virtual theatermary and ethel: how i learned to singRock IslandThursday Night Live