This is part of film critic Connie Wilson’s exclusive coverage of the SXSW Film Festival for QuadCities.com.

“Nobody Speak: Trials of the Free Press” from Director/Screenwriter Brian Knappenberger @ SXSW 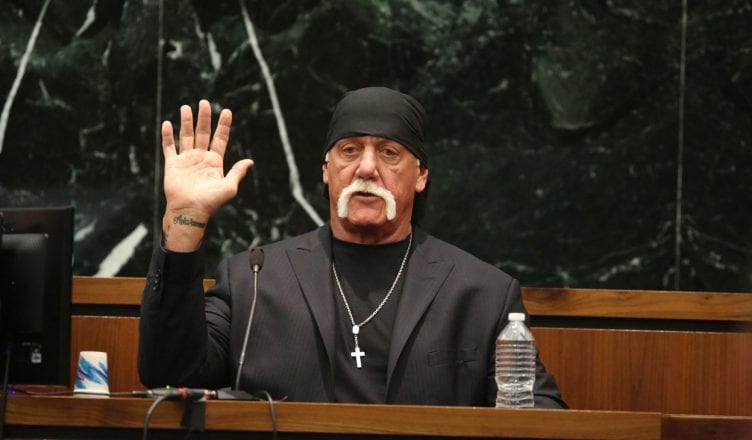 The trial between wrestler Hulk Hogan and Gawker Media pitted privacy rights against freedom of the press, but ended up as a case study in how big money can silence media using legal means. This examination of the free press in an age of inequality echoes the “Vanity Fair” issue with an article by David Margolick entitled “V.C. for Vendetta.”

From that article, we learn that, outed as gay by one of Gawker’s web sites in 2007, Silicon billionaire Peter Thiel ($2.5 billion as a co-founder of PayPal,  and an early investor in Facebook) laid low until 2016, when he seized the opportunity to financially back Hulk Hogan’s invasion of privacy suit over a sex tape to bankrupt the entire organization.

In this documentary that interviews all the principals except Thiel (who is seen speaking at other venues), we learn that “what he’s done is to legitimize the idea that an uninvolved party can fund an effort by someone else in order to destroy a news organization. If billionaires and multi-millionaires can be behind the scenes doing this, that is conspiratorial and underhanded completely.” As Gawker founder Nick Denton, who was personally bankrupted, said, “We were outgunned here.”

Knappenberger dubs it, “abusing the justice system to go after journalists.” All these efforts have taken back a lot of the 1st Amendment rights. Many others are mentioned in the piece:  the Chandler family, the Salzburger family of New York, Jeff Bezos’ purchase of the “Washington Post” and, in greater detail, Sheldon Adelson’s purchase of Nevada’s largest newspaper, the Las Vegas Review-Journal.

John L. Smith, the editor of the Las Vegas Review-Journal wrote a book about early investors in Las Vegas’ history entitled “Sharks in the Desert:  The Founding Fathers and the Current Sharks.” There was one line mentioning Sheldon Adelson. Adelson sued Smith for the one line in the book, and lodged the $15 million dollar suit at a time when Smith was bedside in a local hospital with his young daughter Amelia, who was suffering from a brain tumor.

Smith was offered all sorts of financial inducements not to publish articles about Adelson, but resisted. He was blackmailed regarding the one line in his book, and, as he said:  “Bullies always act the same.” Then, unexpectedly, the entire staff of the Las Vegas Review-Journal was brought in to a meeting cold and told the newspaper had been sold. They were not allowed to know who had bought them.

Rather than take this without investigating, the entire staff, including one particular employee who had been with the paper for 39 and ½ years.  Smith said, “”Everybody came in and everybody stayed.  For us, it was preserving whatever integrity we had.  We knew it was a career-ending movie.  Soe stories are worth losing your job over.” As Smith asserted, “Journalism is a calling for a lot of us.”

As a Journalism Major (Ferner/Hearst Journalism Scholarship recipient), this documentary spoke to me. I characterize myself as “”Old School” because my stint with 5 “real”newspapers began in the sixties and continues today. We were of the generation that grew up with only 3 channels trusting the voice of Walter Cronkite to tell us the truth. There was no Internet. There was no cable television, and we believed in presenting both sides of the story so that readers could draw fair conclusions.

The idea of “hacking” Internet accounts and Wiki Leaks style leaking of documents from the e-mail of others was decades away. I find it personally offensive that anyone in a position of authority can level charges of bias and dishonesty against the hardworking men and women of the press. One of the least honest politicians (or human beings) of all time has underscored just how important a free and independent press is. No less an authority than Thomas Jefferson talked about the importance of a free press in keeping the checks and balances of this country working properly.

This documentary was depressing in that it showed the extent to which being rich means being able to destroy the very institutions we thought were inviolate.  As we watch money corrupting the very fabric of America, we are simultaneously experiencing the intentional undermining of the free press and I, for one, view it as one of the biggest mistakes our Republic has made since its inception.

A very informative, relevant and concerning documentary. Reading the “Vanity Fair” article by David Margolick explained much of the Peter Thiel/Nick Denton Gawker sex tape dispute in far greater detail, which added to my understanding of the film’s rehash of the trial, which was surreal in so many ways. The revelations about the Las Vegas Review-Journal were new to me.

Worth watching, if you care about being part of an informed populace in a democracy.

Advertisement
Connie Corcoran Wilson
Connie (Corcoran) Wilson (www.ConnieCWilson.com) was the Quad City Times film and book critic for 15 years and has continued reviewing film uninterruptedly since 1970. She also publishes books (31 at last count) in a variety of genres (www.quadcitieslearning.com), has taught writing or literature classes at every Quad City college or university as adjunct faculty, was Yahoo's Content Producer of the Year for Politics  and writes on a variety of topics at her own blog, www.WeeklyWilson.com.
See More Articles From Connie Corcoran Wilson
Tagged: AustinBrian Krnappenbergerfilm festivalsfilm reviewsHulk HoganNobody Speak: Trials of the Free PressSouth By SouthwestSXSWTx.