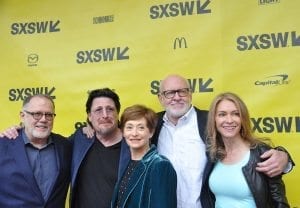 In 1955, creative genius Jim Henson created a troop of puppets known as The Muppets. By 1978 The Muppets” was the most-watched television show in history, with 235 million viewers in 102 countries, according to “Time” magazine. Henson’s untimely death at age 53 in 1990 left right-hand man Frank Oz (real last name: Oznowicz) more-or-less in charge of the troop, which came to fame on “Sesame Street.”

The world premiere of the documentary “Muppet Guys Talkiing” was on Sunday, March 12, at SXSW’s Paramount Theater. The film has been worked on for at least 5 years.

Frank Oz worked with the Muppets from 1963 until roughly 2000. After helping Hansen film “Labyrinth” (1986) he directed “Little Shop of Horrors” (1986) with Steve Martin, “Dirty Rotten Scoundrels” (1988), “What About Bob?” with Bill Murray and Richard Dreyfuss in 1991, “In & Out” with Kevin Kline in 1997, “Bowfinger” with Eddie Murphy in 1999, “The Score” in 2001 and “Death & a Funeral” in 2007. He also signed on to voice Yoda in the “Star Wars” movies and, initially, to perform puppeteer functions for the character (before Yoda was digitalized). Yoda’s distinctive speaking style is credited to Oz, with Lucas giving him creative license to create the character.

Frank Oz’s second wife, Producer Victoria Labalme, suggested that the main puppeteers from Henson’s hey-day get together and talk about Henson’s influence on their lives and on the world. The five appearing in the film were the now-deceased Jerry Nelson, Dave Goetz, “new guy” Bill Barretta, Oz himself and only female puppeteer, Fran Brill.

The project, germinating since 2011, morphed into this short documentary “Muppet Guys Talking,” dedicated to  original puppeteer, Jerry Nelson, (“the Count” on “Sesame Street,”) who died  August 23, 2012. Labalme suggested the project to her spouse shortly after their marriage on July 17, 2011.

An enterprising South African reporter for Polish television standing next to me on the Red Carpet asked the quartet in Austin about Henson. Fran Brill responded, “Henson was the most incredible man I ever met.  He dragged us literally all over the world and enriched our lives.” The group agreed that the creative and collaborative Henson “emphasized treating others well and, hopefully, you would be treated well in kind.” As one said, “I feel blessed to have been put in a place where I could communicate with so many.”

Onscreen, we were treated to vignettes of the most famous of the Muppets and were given behind-the-scenes stories of how each member of the cast came to join as well as the details of some of the difficulties of shooting certain famous Muppet scenes. All agreed that Henson would not ask anyone else to do something that he, himself, would not undertake. His stints in a sunken metal container with breathing apparatus, underwater, for hours (sometimes they worked all night) to make it appear that Kermit the Frog was sitting on a log in the water was diagrammed. Another scene involving shooting an apple off the head of a Muppet character was mentioned (the hired archer was a 17-year-old girl who had only 9 inches between success and disaster), and one particular scene in one of the Muppet movies where the characters appear to be scampering up a pole to escape marauding wolves was explained for the interested audience.

Fellow filmmaker Robert Rodriguez (“From Dusk to Dawn,” ’96; “El Mariachi,” ’92; “Sin City,” 2005), an Austin resident, handled the Q&A onstage following the short film and the seasoned puppeteers explained that they often would find a personal flaw, isolate it, amplify it and try to make it loveable to distill their individual characters. All lauded “the sense of abandon and lunacy that Jim taught us” and one said: “I miss the sense of play that comes from a company owned by a person.  Jim created a safe environment, but you felt you could be as free as you wished.” Puppeteer Dave Goetz said, “We all learned commitment from him. He was the hardest working person I’ve ever met.”

Among other accolades to the deceased Henson (who was raised a Christian Scientist) were:  “He never threw his weight around. He never yelled; if he was mad, he’d get quieter.  He was self-effacing.” The cast reminisced that Henson even wore a costume in the opening television scenes until others talked him out of it and handed the duty to others. Said the cast, “He was a harvester of people. He appreciated all sorts of people and brought them all together. He took a chance on sweetness.  Disenfranchised people feel accepted in the Muppet world.  He was promoting the oneness of the world and was generous and kind.”

Individual quote: From Bill Barretta (“the new guy” even after decades) when asked about his job with the Muppets:  “It’s a dream come true.  To think that this is something that could happen.  Unbelievable.  It was an opportunity to do what I love.”

Fran Brill: “All of our lives were changed in such a way because we all met Jim Henson.  He had more effect on me and my life than my parents.  He treated everyone the same.  This movie was made to champion what he did.”

Dave Goelz (who was working at Dell computers in Silicon Valley at the time):  “I was unemployable in Silicon Valley. I think they were sick of me poking my home-made puppets over the cubicle dividers. I was just too crazy. On top of that, Jim dragged us all over the world.  It is important to have diversity—something that we need right now.” The crowd present at the Paramount reacted positively to this statement.

Frank Oz:  “I worked with Henson since the age of 19. He was just himself and we followed.  Then he helped you with his kindness  He wasn’t caustic. It was a collaborative effort and he was incredibly supportive.”

Reports of the lavish funeral ceremony that also lauded Henson’s basic human decency (Henson died of a virulent form of streptococcal toxic shock syndrome on May 16, 1990, 20 hours after experiencing a medical emergency. We should all be remembered so fondly by our friends, family and colleagues.

Advertisement
Connie Corcoran Wilson
Connie (Corcoran) Wilson (www.ConnieCWilson.com) was the Quad City Times film and book critic for 15 years and has continued reviewing film uninterruptedly since 1970. She also publishes books (31 at last count) in a variety of genres (www.quadcitieslearning.com), has taught writing or literature classes at every Quad City college or university as adjunct faculty, was Yahoo's Content Producer of the Year for Politics  and writes on a variety of topics at her own blog, www.WeeklyWilson.com.
See More Articles From Connie Corcoran Wilson
Tagged: Austinfilm festivalsfilm reviewsJim HensonSouth By SouthwestSXSWThe MuppetsTx.