Little Shop Is Far From Horrendous

I recently had the opportunity to see Little Shop of Horrors at Quad City Music Guild. It is my second time seeing it at the theatre.

Book and lyrics are by Howard Ashman. Musical arrangements by Alan Menken.

The storyline is, to be sure, twisted. Adapted for the stage from the 1985 movie starring Rick Moranis, Little Shop of Horrors is about a dweeby man named Seymour who works at a flower and plant shop on Skid Row in Los Angeles. He is privately in love with Audrey, his coworker. Traditional enough set-up. But we work in a blood-sucking Venus Flytrap plant, a demented dentist, and a good dose of doo-wop and R&B, and you’ve got our fractured fairy-tale, to use fairytale loosely.

Andy Sederquist plays Seymour. And I’m glad he did. Andy played a not dissimilar role in A 1940’s Radio Christmas. When Audrey shows up with a big black eye, both Seymour and his boss, Mr. Mushnik (Joe Urbaitis) are anxious to split her up from Orin.

Now, I’ll grant you, Orin is a piece of human garbage. He slaps Audrey around. He enlists her in bondage and discipline. He berates her. She’s afraid to leave him, for fear he’ll really wail on her. Did I mention that this piece of work is a comedy? So Orin, in the hands of one of my favorite actors, Rob Keech, comes off strangely charismatic in his leather-clad musical numbers. He’s a dentist who thrives on human torture. While watching Rob sauntering, pivoting, thrusting, and swinging his hips through “Be a Dentist,” this production’s big, perfect inside joke finally hit me. “Hey, wait a minute…. Rob Keech really is a dentist!”

I haven’t laughed this heard at an Easter Egg inside joke in a Music Guild show since Miss Sandra landed the pun that “this town makes me miss Milan” in All Shook Up! For the record, our Miss Sandra, Shana Kulkavy, is our choreographer here. And what great dancing they had. Such energy. 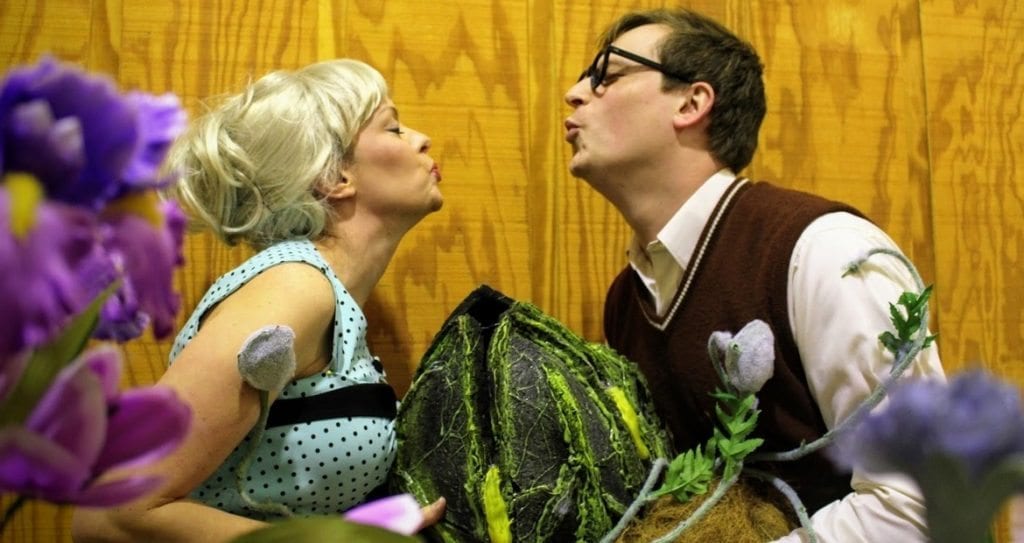 Seymour and Audrey both stand to lose their jobs if Mr. Mushnik makes good on his decision to close up the plant shop. They’ve lost money, by virtue of the fact they’re in a seedy neighborhood.

Skid Row may have gotten more hipster when Ryan Gosling took up residence in the mid 2000’s, but in the 1950’s, it’s the land of drunks, junkies, pocket pickers, wife beaters, and vagrants. The plant store needs something extra special to keep its doors open.

Seymour feels like he may have hit paydirt when he discovers the carnivorous plant, which he dubs Audrey II.

Seymour uses drops of his own blood to feed Audrey II at first. But plant is to human blood like my cat Pam is to her food dish. More please and soon. One sample isn’t enough. Pam doesn’t know when to say when.

At first, Seymour is torn over the prospect of putting a person to death. But Audrey II is the plant store’s meal ticket, no pun intended. The plant becomes an attraction that draw customers. Mind you, none of them want to buy Audrey II. They know better. But a giant plant with a mouth and teeth does have a certain Ripley’s Believe it or Not quality that lends Seymour and Mushnik the suggestion that they may charge admission. And people will pay it. Just for the chance to see the plant. And they often stop by to purchase other flowers while they’re at it.

But poor Seymour has an increasingly hard time keeping Audrey II fed. A most fortuitous accidental death leads Seymour to provide the insatiable plant with enough food to tide him over through the first act. After that, though, Seymour must compromise his principles.

As is the case with Stephen Sondheim musicals, this piece of work is carried by macabre humor. Lots of laughs. And it’s got the cast that it does. Again, Andy Sederquist has the comic timing you’ve got to have in Little Shop. It’s an art to be able to hold for laughs. And to anticipate a second wave. And even a third. It’s one of those things he knows how to do; really, truly, invite the audience in on the joke. The plant can talk. And he’s well matched by Abbey Donahoe as Audrey. And Joe Urbaitis as Mushnik. And George “Big G” Schulz as the voice of Audrey II. And Kelly Rose Thompson, Noel Huntley, and Kailey Ackerman as the the back-up singers. And Koami Lomko Kunake Andreas Renberg, and Alexander E. Linville as puppeteers and Winos. Yes, it requires more than one people to operate the puppet. Matt Holmes did both the directing and set designing. And it works well. The way that bodies can disappear into the mouth of that plant is theatre magic. I thought of Mary Poppins.

And this is to say nothing of the music.

In 1992, my sister got Beauty and the Beast on videocassette. As the film opens, it says “In Loving Memory of Howard Ashman.” I’ve grasped what a tragedy it is that he passed away young since I was a ten year old boy. He thankfully left behind the body of work that he did. “Suddenly Seymour” is a song I was introduced to when I was about thirteen years old at an Alleman High School variety show. And it speaks for Ashman’s ability. That song brings together a sexy buxom blonde and a dweeb. To me, that’s theatre magic. And hey, this guy also gave us “Kiss the Girl,” “Beauty and the Beast,” and “A Whole New World.” As well as “Under the Sea,” “Be Our Guest,” and “Friend Like Me.” As was the case with Mozart, I wonder, often, what more we could have gotten out of this guy if he had more time.

Great work by Holmes, Kulkavy, music director Amy Trimble, and costume designer Sara Wegener, as well as the rest of the production staff. I wish that I could see this one again.

Greg O'Neill
Greg O'Neill is a Spanish teacher at Lewistown Community High School. A native of Rock Island, he currently resides between there and Lewistown. He has been onstage at Quad City Music Guild, Playcrafter's Barn Theatre, Richmond Hill Theatre, and Genesius Guild. He got his start at St. Joseph's Catholic Church when he appeared in Tales of Wonder at the age of eleven. He enjoys movies, theatre, books, baseball, and writing stories.
See More Articles From Greg O'Neill
Tagged: Little Shop of HorrorsMoline theaterMusic GuildProspect Park