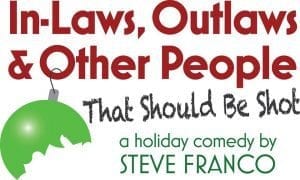 Whenever a Saturday Night Live cast sketch gets adapted into a full length movie, seldom is it the case where a critic doesn’t make the remark “what was a successful fifteen minute sketch ran thin in this 2 hour movie.”

In-Laws, Outlaws, and Other People That Should Be Shot played like a fifteen minute Saturday Night Live sketch that got stretched into a two hour play.

And it worked. It was brilliant.

The premise; the Douglas family is celebrating Christmas. The dad, Tom (Don Faust) has to run around finishing the whole meal while awaiting his wife’s return from Vermont. His feisty emo teenage daughter, Beth (Faith Douglas, hey, wait a minute, that’s her real last name!) wears a Nightmare Before Christmas t-shirt and has a magenta pixie cut. And it is clear from her dry sense of humor that she is going to be the voice of reason in this play. Not much of a holiday person, she nonetheless helps her dad get the table set, all the while muttering droll asides.

Hey, there’s Molly McLaughlin as the overbearing Mrs. Draper. It’s always amusing to see Molly play a sourpuss. I owe my entire Richmond Hill career to Molly, literally, and she’s one of those actor’s actors who is very nice and kind, so it’s hilarious to see her go so out of character onstage. She routinely stops into the Douglas home to remind them to turn on their Christmas lights and to lob undermining remarks at Tom.

If there had been no actual plot to this play, it still would have been worth watching with this cast. Just watching them argue with each other over Christmas dinner is worth the ticket price alone. Ann Keeney-Grafft turns up as Tom’s sister-in-law, Bunny, and she arrives with her husband, Bud, played by James C. Amble. I am guessing based on the localities mentioned in this story that it is somewhere in the vicinity of the tri-state area of New York, New Jersey, and Connecticut. Bud and Bunny are from New Jersey. Trenton was mentioned, so they’re from downstate. This couple probably listens to country music, probably has a pick-up truck, and I would bet that Bud has his NRA license. So they are the lovable bumpkins.

John VanDeWoestyne and Diane Greenwood turn up as Uncle Leo and Aunt Rose, a couple in their seventies who can’t agree about anything. They’re New Yorkers.

Oh, but there is a plot. A couple of small-time crooks show up at their front door. Desperate to hide out from the police, Tony (Nicholas Waldbusser) and Vinny (Jim Strauss) get let in the house, and take everyone hostage. But Tony is clearly flying by the seat of his pants, and Vinny is too dimwitted to be of any real help. So we have a classic set up for a Hostages Turn the Tables on the Robbers story.

Tony has a sack of cash from the liquor store he and Vinny knocked over. But their getaway car stalls. So they chose the Douglas family house to meet and hide out until the cops pass. Tony holds the family at gunpoint and orders them to act like it’s a normal family dinner. And they do. Uncle Leo and Aunt Rose get in a huge argument about whether their favorite delicatessen is on 42nd street or 44th street in Manhattan. Bunny regales everybody with the tale of how Bud stole her heart by shaving her name into his back hair. At one point, everyone at the table takes turns one upping each other with their favorite coffee shops. This moment stretches out. But beautifully. There are many many bad coffee puns that they are able to share as business titles. I enjoyed watching the criminals squirm, thinking that each next coffeehouse name will be the last one. Then someone thinks of another.

Soon, it’s not really clear who are the hostage-takers and who are the hostages. Tony badly wants to control the situation, but the Douglas’ keep making demands. They have to have their ham. And they can’t serve it until the rolls are browned. And everyone has to try the green beans. And mashed potatoes. Oh, and Bunny’s carrot cake! Aunt Rose has to have her coffee. Pretty soon, it’s obvious Tony and Vinny are in over their heads. They’ve gotten themselves trapped into the quintessential awkward family dinner. By the time Bud and Uncle Leo are in a heated debate about the watchability of bowling versus golf, Tony is probably more worried about how he’s going to get himself out of this predicament than the Douglas’ are!

Then there’s Beth and Tony. The smart-mouthed teenage daughter, it turns up, is able to roast Tony left and right.

A sick, sad part of me would watch Nicholas and Faith stare each other down after the latest deadpan and wait to see if one of them would crack. How they did not laugh is pretty remarkable. This was a show Jimmy Fallon could not have pulled off.

Family friend Paul Wakowski (Ryan Gans), also emo, shows up, gets taken hostage, and so does his sister, Emily (Bailey McKean). This further stacks the deck of the voice of reason against the bumbling thieves.

I thought of those great ‘80’s and ‘90’s movies directed by John Hughes, Chris Columbus, and Brian Levant. The bumbling robbers are no match for a dysfunctional family. And thank heavens for that. Eugenia Giebel has done a fantastic job with her cast, and the script by Steve Franco. I think that I laughed as hard at this show as I did at Leading Ladies, The Sunshine Boys, A Bad Year for Tomatoes, and Dearly Beloved. It stood shoulder to shoulder to all of the above plus Laughing Stock, a play I had a role in in 2009, and I had a hard time controlling my twitching lip every time I was onstage. This cast was an example of when all the components fall into place, you can in fact have a two hour play that is hilarious enough to pass for a really good two hour sketch comedy piece.

Greg O'Neill
Greg O'Neill is a Spanish teacher at Lewistown Community High School. A native of Rock Island, he currently resides between there and Lewistown. He has been onstage at Quad City Music Guild, Playcrafter's Barn Theatre, Richmond Hill Theatre, and Genesius Guild. He got his start at St. Joseph's Catholic Church when he appeared in Tales of Wonder at the age of eleven. He enjoys movies, theatre, books, baseball, and writing stories.
See More Articles From Greg O'Neill
Tagged: Greg O’NeillIn-LawsOutlaws and Other People That Should Be ShotRichmond HillSaturday Night Live