If you’re into day drinking, punk rock, indie art, anything vintage, retro, mid-century, quirky or just weird, you need to stop by the Village Theatre (2113 E. 11th St., Village of East Davenport), Sunday, May 16 between 9 a.m. and 3 p.m. 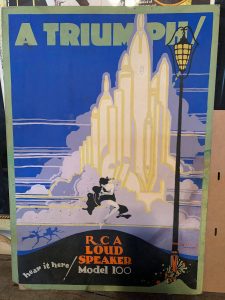 A vintage RCA ad to be sold by Tara Colby.

“The flea market should be super fun, because it’s all a bunch of oddities and artists and there’s not going to really be any commercialized art,” said Q-C burlesque performer (and former Rascals bartender) Lilith St. Scream. “It’s all a bunch of us putting all of our stuff together in a building.” 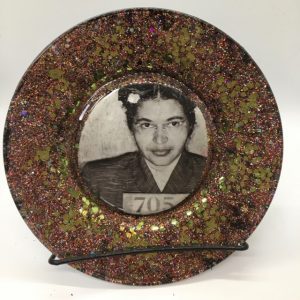 A plate tribute to Rosa Parks to be sold by Suzon.

“There’s going to be just a ton of awesome, vintage fun things,” she said, noting she and her partner will sell some of the burlesque gear she’s accumulated over the years and homemade art pieces.

Suzon (a local artist who goes by one name) sells her wares and works part-time at Abernathy’s vintage shop, 432 W. 3rd St., Davenport. She specializes in finding discarded glass, crystal and other items and repurposing them into trays, plates and other useful holders.

“I have to make more money than I’m making after the pandemic. But we have so many things that we need to sell — Danielle’s got things; her sister Tara has got things, but then we just added some of our friends that do some really cool things as well,” Suzon said recently.

“I have a garage and basement and a house full, but it turned into something bigger. And that’s cool,” she said. “It’s going to be unlike any other flea market — we have a DJ, a full bar. We’re going to make it kind of a social event, more than a just a flea market. And there’s so many 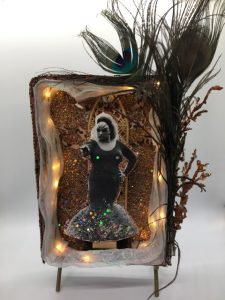 A homemade tribute to Divine to be sold by Suzon.

interesting things that we’re offering. It is kind of like going to a museum. There’s lots of weird stuff.”

“Suzon is absolutely insane. She’s my favorite human,” said Tara Colby, who was manager at Baked Beer & Bread Co. in the Village, until her position was recently eliminated. “She’s nuts beyond anything.”

Tara has done stand-up comedy for burlesque shows, including her famous sister Danielle (who performs as Dannie Diesel), who also has co-starred on the History cable series “American Pickers.” Suzon also has hosted shows for Mary Quite Contrary’s House of Burlesque. “I was selling her art glass at Baked, and she literally said, I want a flea market that’s fun and hip and cool,” Tara said. “This is who we are.” She used to work in the restaurant industry in Nashville, Tenn., which hosts a huge flea market. The Nashville Flea Market at The Fairgrounds Nashville is considered one of the top 10 flea markets in the country, with over 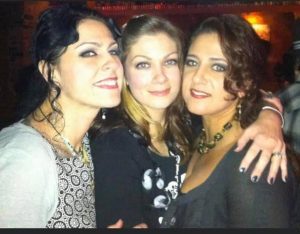 800 dealers and vendors from 30 states offering wares every month. “I don’t know whether the Quad-Cities can support it; my inclination is to say no,” Tara said of a big flea market. “But let me do my thing, let me handle the business side. Let’s see how Sunday goes.”

She and her sisters (including Annie, a local chiropractor) will have a booth at Village Theatre, including several items Danielle has picked from “American Pickers” (which launched on History in 2010). 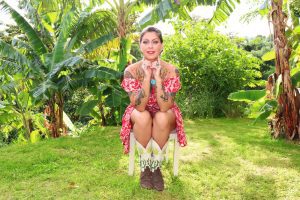 Burlesque collector and performer Danielle Colby has been living and working the past year in Puerto Rico.

“My parents’ basement is full of Danielle’s picks, oddities and weird things,” Tara said. “She’s in Puerto Rico, and I’m trying to do this flea market, selling what she’s got.”

Danielle Colby is in Puerto Rico continuing to aid in the rebuild of the island, while dedicating 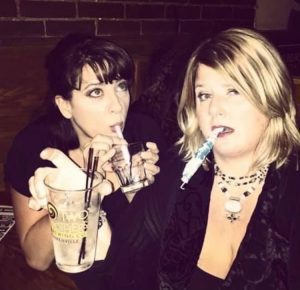 Tara Colby and Suzon play with a couple tampons.

her time to orphanages, animal shelters, and raising awareness on the human trafficking crisis, according to her website. Danielle also has amassed an extensive vintage costume collection ranging from circus costumes to early 1800’s burlesque costumes.

Burlesque performer Lilith St. Scream, another lover of vintage, will have a booth May 16.

“Annie is a true collector of real antiques, vintage glassware. She doesn’t get into the weird stuff,” Tara added. “If this thing takes off, grows some wings, we could move it to the fairgrounds with hundreds of vendors. We have a waiting list — that in and of itself is good deal.”

Danielle Colby is featured with Mike Wolfe on the “American Pickers” home page.

Tara said that Jeff O’Neill, who heads the Midwest Monster Fest (Sept. 3-5 at The Rust Belt), will also have a booth at the flea market.

St. Scream – a co-founder of Moonshine Misfits burlesque troupe – said that she is bringing a burlesque show to the Village Theatre on July 31, as a farewell to Moonshine Misfits. She helped start the group in 2016 and said recently they’re disbanding since members have simply moved on to other ventures, while other newer burlesque troupes (like Mary Quite Contrary) have formed in the interim.

For more information on the July 31 event ($10 in person and $5 for a livestream), click HERE. For a sample of items to be featured at Sunday’s flea market, click HERE. 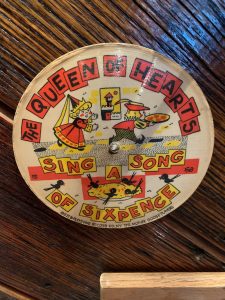 A vintage plate to be sold by Tara Colby.

Jonathan Turner
Jonathan Turner has been covering the Quad-Cities arts scene for 25 years, first as a reporter with the Dispatch and Rock Island Argus, and then as a reporter with the Quad City Times. Jonathan is also an accomplished actor and musician who has been seen frequently on local theater stages, including the Bucktown Revue and Black Box Theatre.
See More Articles From Jonathan Turner
Tagged: American PickersChickenzilladanielle colbyfleazillajeff lassitersuzontara colbyVillage of East DavenportVillage Theater