There will be no joy in Mudville, or Davenport, again this year.

The Quad City River Bandits have canceled their season, in accordance with Major League Baseball’s decision to cancel the entirety of the 2020 minor league season. This is the second year in a row the Bandits’ season has been decimated, as the 2019 season was destroyed due to flooding in downtown Davenport.

The outlook for the Bandits, minor league baseball and the mood surrounding the announcement is grim, especially given previous discussions to contract the number of teams in the minor leagues earlier this year and in late 2019.

“We are in dire straits, and I still have grave concerns,” said Minor League Baseball president Pat O’Conner in a teleconference Tuesday night, according to the Associated Press. “This is the perfect storm,” added O’Conner. “There are very many teams that are not liquid, not solvent, not able to proceed under normal circumstances, and these are anything but normal circumstances given the PBA and the uncertainty of the future for some of these ball clubs.

“I think the coronavirus has really cut into many clubs’ ability to make it. I think we’re looking at, without some government intervention, without doing something to take on equity partners, you might be looking at half of the 160 who are going to have serious problems.”

Below is the River Bandits press release in its entirety, including details on ticket refunds and more: 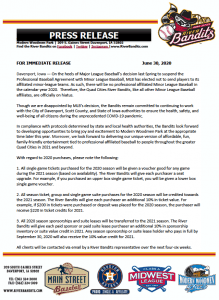 Sean Leary
Sean Leary is an author, director, artist, musician, producer and entrepreneur who has been writing professionally since debuting at age 11 in the pages of the Comics Buyers Guide. An honors graduate of the University of Southern California masters program, he has written over 50 books including the best-sellers The Arimathean, Every Number is Lucky to Someone and We Are All Characters.
See More Articles From Sean Leary
Tagged: John O’Donnell Stadiumlocal baseballlocal events canceled due to coronaviruslocal sportsmajor league baseballminor league baseballQuad City River Bandits