Quad City Arts is having an in-person artist reception for its current exhibit at 1715 2nd Ave., Rock Island, on Friday, May 21 from 7 p.m. to 9 p.m. Admission is free and beer, wine and pre-packaged snacks will be served.

Face masks will be encouraged, but not required in conjunction with the new CDC and state guidelines, according to Quad City Arts. The featured artists – Peter Xiao, art professor at Augustana College, and sculptor Ioan Marcu of Davenport – will speak about their works at 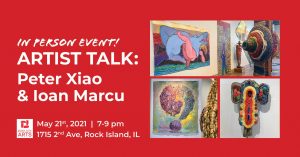 Xiao presents a mixed body of work, “INundATIONs,” completed through the year of the pandemic. It comments on global and national realities through art historical parody, satire, and direct observation. He has been experimenting with painting on unstretched canvas and other surfaces and has moved beyond the rectangular confinement of traditional painting by extending some of his paintings onto the floor. Other paintings lay directly on the floor, to be viewed from above.

Marcu presents a group of sculptural pieces called “Immigrants.” Some of these pieces hang on the wall and others stand freely in the gallery. Marcu feels that he speaks for immigrants through his art since he is an immigrant from Romania. He lives by the motto that “Immigrants may find it a challenge to express themselves in English, but art is a universal language.”

He uses real shoes in his artwork to symbolize the idea that people have moved around the world. Marcu has woven oversized “hats” and figures from wildly colorful fibers to represent the diversity of people who have made the United States home.

You can browse the two men’s art and shop line at www.quadcityarts.com/rock-island-gallery.html. The exhibit at the downtown Rock Island gallery will be on display through June 18.