As Illinois relaxes its social restrictions Friday (including allowing all gatherings of 10 people or fewer), the Quad City Arts Center, 1715 2nd Ave., Rock Island, will reopen Friday at 10 a.m. Free entry is available 10 a.m. to 5 p.m. weekdays and 11 a.m. to 5 Saturdays.

Following the next phase of the “Restore Illinois” plan, which also allows bars and restaurants to open outdoor seating under restrictions, executive director Kevin Maynard said May 29 was the earliest the downtown gallery could reopen.

“We’re taking all the precautions, taking it seriously,” he said Thursday. “Both employees and patrons will be required to wear a facial mask. We’re also limiting the number of people in the gallery at one time to no more than 10 people.”

They’ll also be increasing the disinfecting and cleaning high-traffic and touch points. 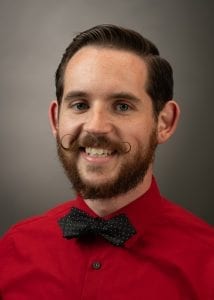 “We’re excited to really be able to highlight our local artists again,” Maynard said. “We created the website so people can go and look at this art, and potentially purchase this art, but I think everybody agrees that seeing it on the screen and seeing it in person is a very different experience.”

Alex Salaverria, who joined earlier this year as media specialist, updated quadcityarts.com with the input of all the staff, including showing works from the current gallery exhibit and allowing people to buy art online, which was never available before by the 50-year-old nonprofit.

“Every person at Quad City Arts played a big role in improving the aesthetics, the way that the website functioned,” Maynard said. “Now, it’s more intuitive; it’s got some great information and content, and the great added bonus of not only being able to look at the art online, but purchase that if you so choose.”

The 43rd-annual High School Art Invitational was presented online, since Quad City Arts could not have its early April annual awards ceremony and exhibit.

“Our mission has never been more important,” Maynard said in the video online. “At a time when the world is turning to arts for comfort, it would be wrong for us not to recognize the up-and-coming artists right here in our community.”

This year, Quad City Arts worked with teachers to present a digital gallery of the students’ art. Dawn Wohlford-Metallo, visual arts director, presented over $5,000 in student awards in the video.

The current gallery exhibit, which you can see in person through June 19, is photography by Ken Urban of Durant, Iowa and paintings by Margaret Ertz, of Burlington, Iowa.

Urban travels the backroads of the Midwest with his camera in hand. This show is about the forgotten silos that blanket the countryside, no longer in use, but towering symbols of days gone by, according to a show release.

“In the rural American landscape, with its ever-changing farm practices and abandoned barns on the verge of collapse, the silos are often the only reminder of the past. Occasionally a tree blooms and grows in the protection of these silos. Urban’s photographs capture and share a unique and intriguing story about the history of rural America.”

Ertz has been drawing and painting for over 40 years. She uses both oil and acrylic paint to depict urban settings and cityscapes from her hometown of Burlington, as well as other cities she has explored. “Ertz is a master at capturing city lights at night, reflections on wet pavement and floodlit architecture,” Quad City Arts has said.

“Really, really talented artists and a really great show,” Maynard said. “We’re looking at some virtual opportunity to spotlight and highlight these artists, to give them an opportunity to talk about their work.”

Compared to last summer, when the Metro Arts apprenticeship program served 92 area young people (ages 15-21) in eight projects, this June will be just three – two outdoor murals and an improv-comedy group, with fewer than 30 artists. 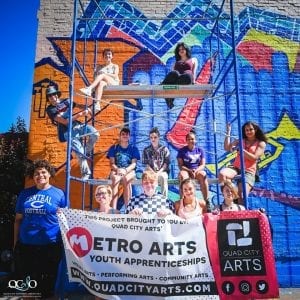 The groups, including the lead artist, will be no more than 10 each, with social distancing in place, and the improv comedy group will be smaller. ComedySportz veteran Erin Mahr will lead the improv students, Maynard said, while Davenport artist Sarah Robb may lead both murals.

Since 2000, Metro Arts has provided paid summer apprenticeships in various arts disciplines. The program provides opportunities for youth and enhances the community through the arts. For five weeks, area youth work together in groups to complete art projects under the supervision and mentorship of professional artists. Participants learn the artistic techniques and applications of their particular genre while developing personally and professionally. Murals and street paintings throughout the Quad-Cities are the lasting legacy of programs past.

This year’s murals will be at Friendship Manor in Rock Island (a maintenance building off 11th Street and 21st Avenue), and an outdoor courtyard next to La Primavera (1510 6th Ave.) in downtown Moline. This actually will be the first Metro Arts mural in Moline.

Lead artist Sarah Robb — who’s worked with Metro Arts since 2005 – led a separate mural project in summer 2018 across 6th Avenue on the Child Abuse Council wall (between 15th and 16th streets), the same year she worked with Metro Arts, did a new mural for Moline’s Floreciente neighborhood at 8th Street and 6th Avenue, and helped a friend and fellow muralist, Heidi Sallows, paint the wall outside Fred & Ethel’s antique store at a new Rock Island pocket park at 30th Street and 14th Avenue.

“We’re working with those artists and agents to figure out a new plan. It is likely that we’ll be doing more virtual content with these artists,” he said. “We do think it’s very important to provide access to that type of work to local schools. Depending on how their programs shift – there’s some talk of not going back right away in the fall – doing some distance learning like they’ve been doing.”

“It’d hard for us to put an artist in schools if the schools aren’t there,” Maynard said. Some artists have postponed tours to 2021, some are willing to tour this fall, and some will do online content.

Last school year, 24,649 K-12 students were reached in the area through the series. This spring’s visiting artists had to be canceled due to the coronavirus crisis.

Typically by this time, Quad City Arts has booked its artists for the following year and is working with the schools on scheduling. “Everybody’s schedules have been pushed back,” Maynard said. “We’re waiting for information from the CDC and government entities to give us guidance.”

Like most other businesses and organizations over the past 10 weeks, Q-C Arts staff has been working from home and checking in daily through Zoom.

“Primarily, it’s been a combination of future planning – figuring out how we can pivot some programs, because we’re not sure how long some of these guidelines are going to last,” Maynard said. “Also, there’s the public perception – when are people going to be interested in coming into a crowded room again?

There were plans to update the website for a year. “Since we had some free time, we pushed it forward,” he said.

The 33rd-annual Riverssance Festival of Fine Art is scheduled to go on Sept. 19-20 in Lindsay Park in the Village of East Davenport. Quad City Arts is taking it over from Midcoast Fine Arts, which disbanded at the end of March. It’s working with the existing Riverssance committee.

“Depending on the guidelines from the state, what does that change for Riverssance?” Maynard asked. “Regardless, how can we still have a Riverssance experience, given those changes? What can we do, to maybe take some of it or all of it virtual, to still give the exposure to these great artists that come to this festival?

It may be online, similar to what the spring Beaux Arts Fair did earlier this month.

The Rock Island-based nonprofit – which also operates a gallery at the Quad City International Airport – was founded in 1970 as Quad City Arts Council, which started with a visual arts gallery and re-granting program for local artists. It serves six counties in western Illinois and eastern Iowa.

It launched Visiting Artists, Inc. in 1974 as an educational residency program presenting multi-disciplinary performing arts through residencies in schools and at community sites. Due to high demand for the residencies, Festival of Trees debuted in 1986 as a fundraiser for the program.
​
The organization’s dual role of presenting the arts and humanities, as well as serving as an arts resource, allows it to serve more than 350,000 people annually in the Arts Center in Rock Island and at over 200 rural and urban community sites. In 2019, it granted $90,000 in Arts Dollars to 21 local projects and also led placement of 12 new public sculptures, and exhibited 266 artists in gallery shows (including the High School Art Invitational).

Q-C Arts also has postponed its Run for the Roses Derby Party postponed from May 2 to Sept. 5 at Crow Valley Golf Club, Davenport, since the 146th running of the Kentucky Derby was postponed.

Quad City Arts also is asking the area public to show off whatever artwork you have felt compelled to create during this time of uncertainty,

All artists residing within a 250-mile radius are invited to submit up to two artworks of any medium created during the quarantine period which began in March 2020, for a juried, group exhibition in Quad City Arts’ Rock Island Gallery from January 29-March 19, 2021.