Kevin Maynard was as busy as a Christmas elf last Friday afternoon, as he distributed sugar cookies in the area to help promote the 35th-annual Festival of Trees.

In fact, the Quad City Arts executive director dressed as an elf to deliver the Olde Towne Bakery treats (topped with the Festival logo) to his home-based co-workers and other Festival supporters. 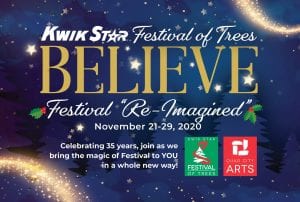 The 35th-annual Festival of Trees theme is “Believe.”

Among Maynard’s cookie run was for Kelly Oberhardt of KONE Spares (a team of the local KONE company), who covered the cost of her cookies and she matched donations of her team – raising a total of about $500 for Festival of Trees.

“Things have been going pretty well and we have donations still coming in, so that’s a good thing too,” Maynard said Monday. Of the $120,000 fundraising goal for the rest of the week, $75,953 was raised as of Monday afternoon, from 156 donors.

In place of the traditional kickoff, the Festival of Trees Holiday Parade, Saturday’s Day of Giving was to encourage most donations that day, as certain donors pledged to match others up to a certain amount.

Former Quad City Arts board president Chris Rayburn and his wife Mary pledged to match dollar for dollar up to $20,000, and Anne Colville and Steve Morrison committed to match up to $2,000, and ended up raising $2,681 so far with their support.

Morrison is a current board member and Festival volunteer, and his wife Colville ran the cookie caravan this year, Maynard said. That couple posted on their fundraising page —

“The Festival of Trees is not just a beloved family tradition to start the holidays, it is a critical source of funding for Quad City Arts programs that add so much to our quality of life. Programs like the Visiting Artists, who entertain and inspire thousands of our schoolchildren every 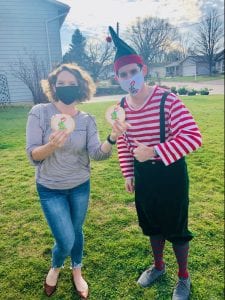 year. We are so committed to the continuation of these programs that we pledge to match the first $2,000 of donations that we receive during this fundraising drive.”

“I think people are encouraged when they see that – that their gift is being matched, their dollars will go further,” Maynard said. “Not everyone’s able to give at such a large level, so being able to give $20 and know that’s more like $40, is a nice incentive.”

Raising money the rest of the week may be a challenge.

“The nice thing is that our Holiday Special is airing right now in the Paula Sands slot and we will also have some things going on, on Facebook and social media, so we’re optimistic we’ll keep that rolling out throughout the week,” Maynard said Monday. “And everyone who comes in the gallery can actually see on our screen how many dollars have been raised, and encourages them to give as well.”

Maynard was very happy with how the KWQC Holiday Special (co-hosted by Sands and David Nelson) came together. It was first shown Saturday morning at 10 a.m.

“It highlights exactly what Festival of Trees funds, and how it’s connected to Quad City Arts, which is something that’s been a challenge for our organization for many years,” he said. “Not a lot of people understand that connection and I think we’ve been able to solidify that a little more in our community.”

The one-hour Holiday Special & Day of Giving on KWQC featured coverage from past Festival parades, Centerstage entertainment from Moline’s Spotlight Theatre stage, a special message from Santa and more. 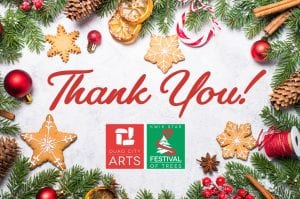 Quad City Arts has raised about $76,000 so far for Festival of Trees, which continues through Nov. 29.

Over the past 35 years, Festival has evolved from a two-day event in one room, into a 10-day event using the entire 70,000-square-foot RiverCenter complex in Downtown Davenport. The event typically features 100 designer trees, 14 special events, the largest helium balloon parade in the Midwest, 3,500 volunteers and more than 100,000 visitors each year.

Festival usually has a $2.5-million economic impact on the community and is recognized as one of the top events of its kind in North America, raising over $8 million in support of local arts since 1986.

This year’s Festival is virtual for the first time ever, with a hybrid experience of select designs, ornaments, gift shop items and VIP Baskets available for purchase online and at Quad City Arts’ Rock Island Gallery, 1715 2nd Ave., through this Sunday. Other Festival favorites include Toy Tree donations for Toys for Tots, Honor Tree Ornaments and Festival “exclusive” Isabel Bloom sculptures.

Contributions will be accepted through the end of December. A donation of just $10 gives one student an arts education experience for one 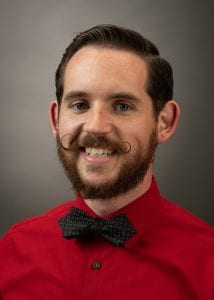 While there won’t be a 20-foot Toy Tree this year, RE/MAX River Cities is helping continue the tradition by accepting donations of new and unwrapped toys now until Nov. 30 at either RE/MAX River Cities location — 900 36th Avenue, Moline, or 4555 Utica Ridge Rd., Bettendorf. They will be given to the local Toys for Tots.

Festival of Trees is the largest fundraiser for the 50-year-old nonprofit – which serves a six-county area in eastern Iowa and northwestern Illinois. Quad City Arts is dedicated to the growth and vitality of the region through the presentation, development, and celebration of the arts by offering the community arts opportunities, programming, and community events.

The Rock Island gallery hours are:

To donate or for more information, visit qcfestivaloftrees.com.

Jonathan Turner
Jonathan Turner has been covering the Quad-Cities arts scene for 25 years, first as a reporter with the Dispatch and Rock Island Argus, and then as a reporter with the Quad City Times. Jonathan is also an accomplished actor and musician who has been seen frequently on local theater stages, including the Bucktown Revue and Black Box Theatre.
See More Articles From Jonathan Turner
Tagged: Bettendorfevents canceled due to coronavirusevents canceled due to covid-19Festival of Treesfundraiserskevin maynardMolineQuad City Artsre/max river citiesRock Island