It was baby’s first protest.

My daughter,  Harper, is 6, and didn’t quite understand why we were there but she knew it was important and it was for some guy who died.
Kids have empathy so she was on board.

It was really something to see. And her reaction to it was awesome. 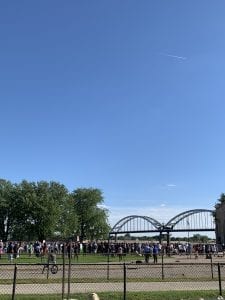 She somehow got it.

And it wasn’t hard to grasp the importance and grace of the event.

Downtown Davenport. A beautiful Saturday evening. The streets filled with people. It could’ve been any other Saturday night, pre-covid, in the summer, during a festival, or even just a nice evening with the streets full of people. But today, it was far different, and it was much more than any regular Saturday.

I was there, with my 6-year-old daughter, along with hundreds of others, some of whom also had their children.

And as such, I can tell you it wasn’t the chaotic mess it’s being made out to be.

The spin around the George Floyd Awareness/Protest March in the Quad-Cities, covering Davenport and Rock Island downtowns, has become, according to some local media, all about the broken windows at the courthouse.

That was a very small part of what amounted to an extremely peaceful and pointed Black Lives Matter event. Sure, I know it’s better television to show three WHITE — WHITE — thugs throwing rocks at the courthouse but why not show the respectful rally in LeClaire Park or the organized march through Davenport to the courthouse? No acts of violence. No acts of hate. It was all about peace, love and awareness.

At the same time there were protests all across the country, streaming across social media. Some were far larger, some had a much different vibe. But here, at home, the crowds were very largely peaceful. 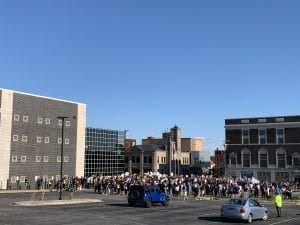 Harper and I were with the protest at LeClaire Park and followed the march to the courthouse and not once did we see anything CLOSE to what we have been seeing around the country. I understand that soon after we departed the courthouse, some idiotic men did try to create some chaos by throwing objects at the courthouse, effectively busting some windows, but failing miserably to incite a more serious incident.

Our vantage point was from a distance as I am still being cautious with, as my daughter calls it, “the sickness,” but I was able to talk with a few people within the belly of the beast and even in a close up, the sentiment remained the same.

One of those people, 49-year-old Air Force Veteran Brad Haan, a long time Davenport resident and familiar face at the Circa ’21 Speakeasy, said, “I was proud of my hometown for making a peaceful meaningful statement. I hate the word protest at the end of the day because it’s really a statement you are trying to make,” he said. “No violence was committed and the bad apples tried to ruin it but the masses did not allow it.” 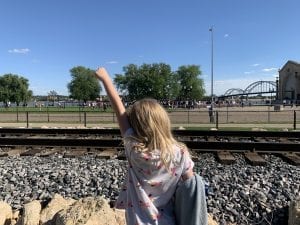 And 18-year-old Eastyn Anderson, a recent Rock Island High School graduate, said, “I think it was very powerful and moving, and even though there was a small incident, I am glad nothing got too out of control and everyone was safe.”

She continued, “This was an important moment and I am so happy to see so many people supporting the Black Lives Matter movement and protesting our corrupt justice system.”

Old? Young? it didn’t matter today. For a brief few hours on this beautiful Saturday a few hundred people were united for a single cause. We don’t see that often enough and during these troubling times we need to see it more.

As we walked back to the car Harper said to me, “Daddy, that was nice that all walked together and said the same things. People get mad too much right now.”