Local cornbread aficionado Aiden Landman has been gifted with a golden honor. 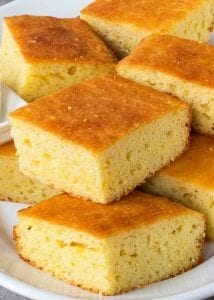 Cornbread. Food of the gods.

According to an excited and tasty post on Landman’s Facebook just moments ago, he was nominated by the NCCBA (National Council for Cornbread Awareness) for the 10 day favorite cornbread image challenge.

“Every day I will select an image from my cornbread pictures that has had an impact on me, post it without explanation. That’s 10 days, 10 cornbread pics, no explanations,” Landman posted.

There’s one thing that needs no explanation though: This is one of the most prestigious and impactful cornbread-related honors ever bestowed upon a Quad-Cities resident.

There’s another thing that also needs to explanation: Cornbread is the bomb, yo.

Keep your eyes posted to Landman’s Facebook as he posts his most impactful and influential cornbread pictures. The results will undoubtedly be controversial, mind (and stomach) expanding, and… delicious.

Sean Leary
Sean Leary is an author, director, artist, musician, producer and entrepreneur who has been writing professionally since debuting at age 11 in the pages of the Comics Buyers Guide. An honors graduate of the University of Southern California masters program, he has written over 50 books including the best-sellers The Arimathean, Every Number is Lucky to Someone and We Are All Characters.
See More Articles From Sean Leary
Tagged: 10 cornbread pics10 daysAiden Landmanawardscornbreaddonutsfoodhoagie challengehoagy carmichaeli think that's how you spell thatKhalil Hackerlocal cornbread aficionadosmojitosNCCBA (National Council for Cornbread Awareness)prestigious honorspretty sureSean LearyTristan Tapscott