Home › Columns › Sean Leary › Oh, For Christ’s Sake, Just Let People Have Their McRibs And Be Happy In This Crap Show Year

Oh, For Christ’s Sake, Just Let People Have Their McRibs And Be Happy In This Crap Show Year

I was scrolling through my news feed on Facebook today, as I am wont to do when I want to incrementally lose faith in humanity, and I stopped briefly on a posting by someone trying to make themselves look far more hip and cool than they actually are.

I know, I know, hard to pin that one down when it comes to social media! You’ll never guess who I’m talking about when you’ve got 80 million people to choose from there…

Anyway, the person was making a comment about a certain fast food item that some people profoundly enjoy. They post about it. They revel in its return. They write with glee about its magnificence to them. Quite frankly, I think many of them would marry it if it were legal to do so. And really, isn’t it about time to vote to make that legal? Love between a man, woman, or non-binary person and a sandwich should be between that man, woman, or non-binary person and that sandwich, and no one else.

The previous message was brought to you by The Church of Oprah And Present Day Saints.

Anyway, this wannabee hipster person was scalding the fans of said item, which is within their right to express their opinion, but they ended it by saying “You’re all wrong for thinking this is any good. It’s nowhere as good as you think it is.”

Now, of course, upon reading this, my inclination was to instantly message this person.

Because, well, if they can read minds with that much accuracy and are that certain about the vagaries of chance and choice, well, I want next week’s lottery numbers from them.

They didn’t message back.

And so, a little tear trickled down my cheek, like that Native American guy in that old commercial.

Then, I turned and walked away, with my backpack slung over my shoulder, as the Incredible Hulk Lonely Man Theme played in the background, and I strode into the distance, to my destiny…

A destiny that, for the moment, involved me writing this column.

And one of the reasons I wanted to write this column is that, for one thing, NOBODY can ever say someone is wrong for thinking a food item is good. It’s an opinion. It’s a matter of preference.

You can jokingly say that pineapple on pizza is an abomination against God and man, but you’d be wrong, because it’s a delicacy of the Gods and a gift to man. However, in that case, both of us are right — for ourselves. I love pineapple on pizza. You may hate it. But I can’t say you’re wrong, and you can’t say I’m wrong. It’s completely subjective and a matter of opinion.

The same way this person can’t say with such venom that people are wrong for liking this certain foodstuff that rhymes with McHibb, and they can’t say that it’s not as good as they think it is, because for one, how can you read their minds to find out exactly how good they think it is, and for another, that’s just like, their opinion, man. 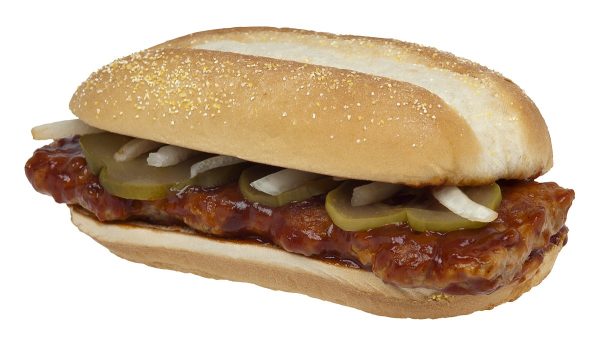 And when it comes down to it, it’s really kind of a superficial thing.

And it’s also something that, especially in a time like this, and a year like this, we should just back off and let people have their small moments of joy regardless of how we feel about them personally.

Because not only do those little things sometimes mean a lot during times that are difficult, but in the big picture, those superficialities often don’t mean a whole hell of a lot in accurately judging someone’s character.

For example, as you all know, I make fun of Nickelback as much as the next guy. Especially if the next guy isn’t Chad Kroeger.

But the fact is, one of the best relationships I had was with a woman who was one of the kindest people I’ve met, and she loved Nickelback.

Conversely, I’ve had horrible relationships and encountered really shitty people who had the exact same musical and entertainment tastes as me.

When it comes down to it, people have a right to enjoy what makes them happy, and it’s not up to me or anyone else to condemn them or judge them for that. I might vehemently disagree with their choices, I might consider it a form of torture to join them in engaging in them, but what’s REALLY important is if someone is a good person, has good character, and is nice and respectful to you as a human being. THAT is worth a hell of a lot more than being able to agree on music and TV choices.

Trust me on this one.

Also, it’s really not up to you, or your right, to tell someone what they can and can’t like, or to make statements like “that’s not as good as you think it is.” Everyone is entitled to their own opinions, their own preferences, and their own things that bring them joy. And in this world, which can be pretty damn shitty, we need to embrace those things that bring us joy.

And yes, Goddamn it, let them have their McRibs.

Because if there’s one thing I’ve learned through all the relationships I’ve had, it’s that I’d much rather be with someone who’s kind, and nice, and cool, and upbeat, with good character, who has completely different entertainment tastes than me, than the opposite.

Now, if you’ll excuse me…

Sean Leary
Sean Leary is an author, director, artist, musician, producer and entrepreneur who has been writing professionally since debuting at age 11 in the pages of the Comics Buyers Guide. An honors graduate of the University of Southern California masters program, he has written over 50 books including the best-sellers The Arimathean, Every Number is Lucky to Someone and We Are All Characters.
See More Articles From Sean Leary
Tagged: church of jesus christ and latter day saintsgrimacehelp me tom cruisehumor columnsincredible hulkincredible hulk lonely man teammayor mccheeseMcDonald’smcribnative american guy in the commercialOprahronald mcdonaldSean LearySean Leary columnxenu