When my wife Betsy and I were married in July 1990, in a Quaker meeting house in Evanston, Ill., we included two Catholic priests in the service (in honor of my upbringing), but we “married” ourselves, under the care of the meeting, not repeating vows from a benevolent clergyman. 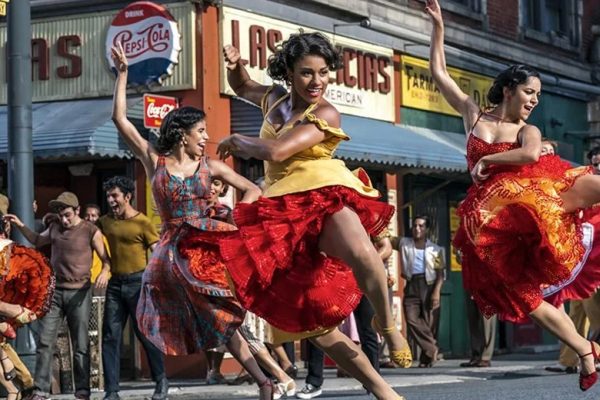 During plans for our interfaith ceremony, I originally wanted the music to the immortal “One Hand, One Heart” played during our vows, joining our different faith traditions, but for some reason I backed out. The quiet, reverent Leonard Bernstein-Stephen Sondheim song (from 1957’s “West Side Story”) is one of the simplest, most beautiful wedding hymns I know, which sings:

Make of our lives one life,
Day after day, one life.

Now it begins, now we start:
One hand, one heart.
Even death won’t part us now.

Watching the mesmerizing scene from Steven Spielberg’s new version of the Broadway classic (itself a retelling of Shakespeare’s “Romeo and Juliet”) as Tony (Ansel Elgort) and Maria (Rachel Zegler) soar in this duet – flooded with light from the stained glass windows of the Church of the Intercession in New York’s Cloisters, it was one of several times I wept silently into my N95 mask. 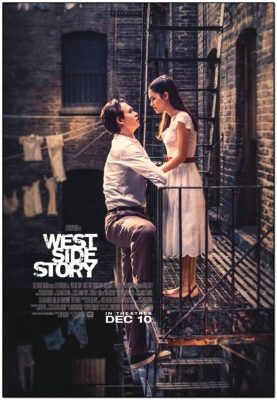 Seeing the stunning, thrilling and breathtaking new film (Spielberg’s first musical) was an emotional rollercoaster ride for many reasons. The story itself – with a fresh screenplay by Tony Kushner (“Angels in America,” “Caroline or Change,” “Lincoln”) – grabs at your heartstrings from the start, never lets go, and plucks them as expertly as a harp virtuoso.

The tragedy (full of drama, violence, bitter ethnic tensions, ill-fated romance, assimilation and hope, as well as top-flight music and dance) is familiar to theater fans:

In 1957, a gang of White youths, the Jets, fight the Puerto Rican Sharks for control of San Juan Hill on Manhattan’s West Side. A brief skirmish is broken up by Officer Krupke and Lieutenant Schrank, who tells the gangs that the conflict is pointless since the neighborhood will be demolished to make way for Lincoln Center. The gangs are too proud to care, and Jet leader Riff proposes a “rumble” between the two. 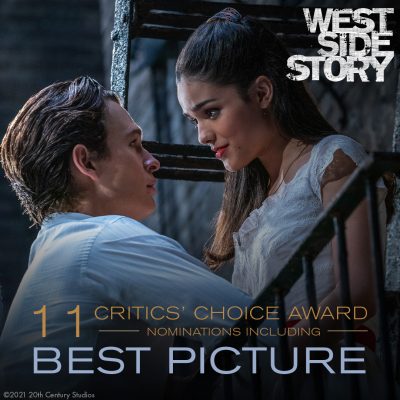 He approaches his friend Tony, who is out on parole, for help. Tony refuses, wishing to turn over a new leaf with the help of Valentina, the Puerto Rican owner of Doc’s general store. Meanwhile, Maria, Shark leader Bernardo’s sister, is betrothed to his friend Chino but yearns for independence. At a local dance, Tony and Maria meet and fall in love. This angers Bernardo, who agrees to Riff’s terms for a rumble if Tony attends. Tony voices his love for Maria and the couple meets on Maria’s fire escape, promising to see each other the next day.

Bernardo and his girlfriend Anita feud over life in New York compared to Puerto Rico, with Anita buying into the American Dream in spite of the pessimistic Bernardo. The police interrogate the Jets about the rumble, but they deny any knowledge. Tony takes Maria on a date to the Cloisters in Upper Manhattan. He reveals he was imprisoned for a year after he nearly beat a rival gang member to death, which scared him into reforming. Maria makes Tony promise to stop the rumble and they pledge their love to one another. 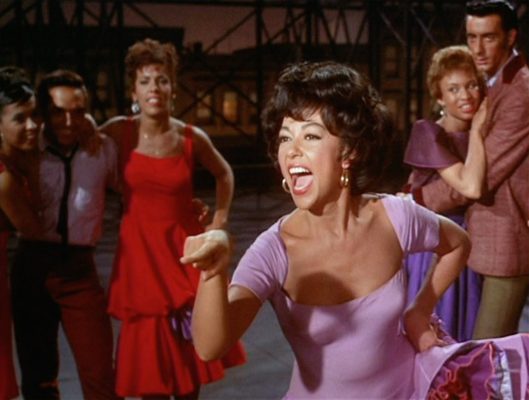 Rita Moreno won an Oscar for playing Anita in the 1961 film.

Tony tries to convince Riff to call off the rumble by stealing his newly-bought gun, but the Jets steal it back. Schrank orders Krupke and the police to stop the rumble. Despite their and Tony’s efforts, the rumble continues and Bernardo fatally stabs Riff. Tony, in a fit of rage, stabs Bernardo and kills him. All this is just in the show’s first half.

Many people have questioned the need for another “West Side Story” film, 60 years after the original won 10 Oscars, including one for Rita Moreno (as feisty Anita), setting her on her way to the rarified EGOT. While the original four White, Jewish gay guys (composer Bernstein, lyricist Sondheim, librettist Arthur Laurents, and director/choreographer Jerome Robbins) created it partly to reflect the gang violence of the era, this movie – with all its pulsing anger, feeling and explosive energy – feels even more relevant and meaningful today.

Spielberg has loved the musical his whole life and his new version was meant to give actors of color the chance to more authentically tell the tale of ethnic strife, prejudice and simmering hatred; Moreno, for example, was the only Latina in the cast of “Puerto Rican” female characters in 1961. Our society seems more polarized, bitter and race-baiting than ever, and “West Side Story” is a plea for simple tolerance, kindness and understanding. 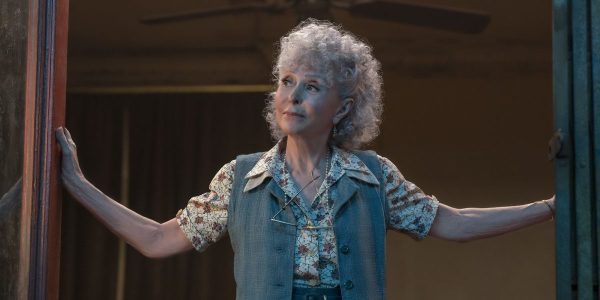 Moreno was 88 when she played Valentina for the new “West Side Story.”

Another review I read of the new film inexplicably took its lesson as, it’s just better if people would “stick to their own kind.” That’s just ostriches sticking their head in the sand, and ignoring the reality of our multicultural, global world. We all just need to try to get along with each other, and think of the community/society as a whole, not our petty self-interest (e.g., politics and Covid, anyone?)

Artists create new versions of classics ALL THE TIME. Virtually anytime you attend live theater, opera or a classical concert, you’re seeing performers unfurl their interpretation of a piece that’s often been done over and over again, all over the world. The benefits of art include seeing how those artists put their own mark and expressive spin on something familiar and beloved.

Why can’t Spielberg and his immensely talented cast and crew do the same? The staggeringly amazing cast of “West Side Story” includes Ariana DeBose as Anita, David Alvarez as Bernardo, Mike Faist as Riff, Rita Moreno as Valentina (widow of the original store owner, Doc), Brian d’Arcy James as Officer Krupke and Corey Stoll as Lieutenant Schrank.

The other main reason the new movie was so heart-rending for me was it was my first back in an actual movie theater since the first week of March 2020. We went on Monday, Dec. 13 (the day before my birthday), to avoid “crowds,” and fortunately, we sat in one of Cinemark’s biggest theaters, in the last row, and were among just six people in the theater total.

During the pandemic, I got so used to seeing entertainment online – through a computer screen or my small iPhone. Those distractions and enlightening shows have certainly helped me cope and survive, but there’s no substitute for seeing a big film on a big screen. And Spielberg knows for sure how to make the most of that screen. 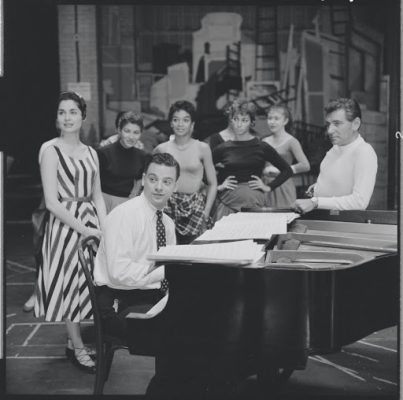 I also have to take issue with many critics who have trashed Elgort’s “wooden” performance as Tony. He may not be the best dancer, but he exquisitely captures his character’s connection with Maria, and truly gives you the sense that love can conquer all (spoiler: it doesn’t). Elgort’s eyes are far less expressive than the heart-melting Zegler, but he nails the role, reflects the optimism and anguish, and you root for Tony all the way through.

Moreno – who just turned 90!! — also makes the most of her “more than a cameo,” making her the moral center of the story, trying to broker peace and be a bridge between the warring sides. One of the major changes in the new film was letting her sing “Somewhere” as a yearning, wishful plea – as opposed to its traditional ode for the central couple to find their place. 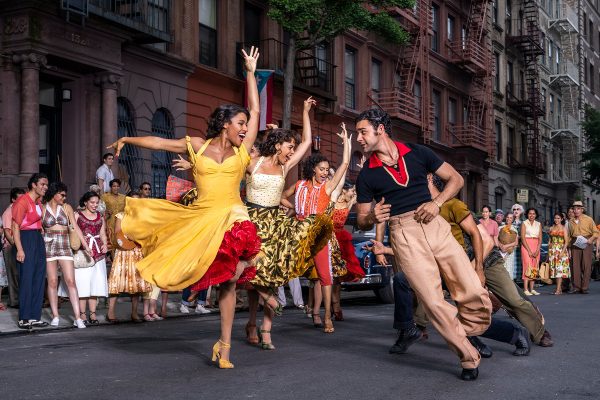 While Sondheim (who tragically died two weeks before the film’s release) has criticized some of his lyrics for the show (including putting an emphasis on a minor word, “a,” as in “There’s a place for us…”), the songs have all become well-deserved classics. And this “Somewhere” is a sweet dream that can apply to any of us, and achieves what Sondheim and many writers (including me) feel eludes them – heartfelt simplicity.

As another variant has ruthlessly invaded our Covid-cursed times, and threatens our return to normalcy, it’s also a bit depressing to see the weak box-office returns for the new “West Side Story” – less than $18 million domestically after its first two weekends.

It’s not that people aren’t returning in person to movie theaters. This weekend, the new “Spider-Man: No Way Home” brought in the third-highest opening EVER in box-office history — $253 million in North America (and $587 million globally!)

I like inspiring, heart-pounding superhero flicks as much as the next guy, but why does “Spider-Man” do so much better than the Spielberg piece of perfection? “West Side Story” is just as inspiring and heart-pounding, and its singing and dancing are all real – though some sets I am sure were computer-generated.

People are screaming about how important it is for performers of color to get their due on screen, and the new “West Side Story” does that, and speaks to issues that are roiling our country. Maybe a little too close for comfort, then? Do we need our art always to serve as an escape from our problems? 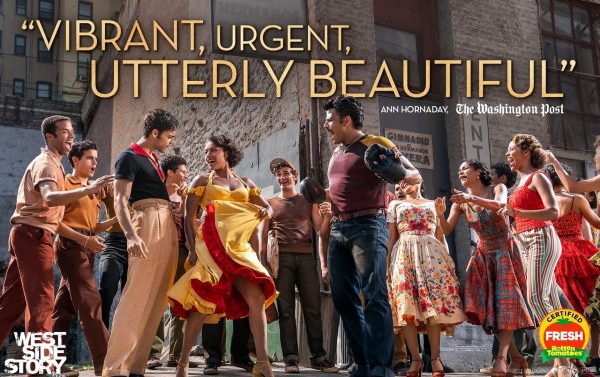 As Sondheim so intelligently and humanely showed us, musicals often work best when they speak to us personally, where we are – the good and the bad. Charles Isherwood wrote, shortly after the master’s death: “When we see Sondheim musicals today, they do not, as many revivals do, inspire mere innocuous affection. They invite argument, they stoke ambivalence, and often leave you with the sometimes bitter taste of newly acquired — or affirmed — knowledge of the complexities, and deficiencies, of human nature and experience.”

Sondheim revealed the glories and passions of us, in all our flawed nature – and while some superheroes have flaws (like Superman and his Kryptonite), none of us can soar like “Spider-Man.”

But when we see, sing or admire “West Side Story,” our heart and mind soar, and that’s the greatest special effect of all. 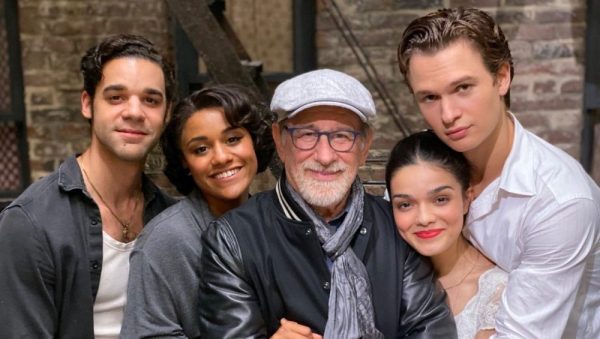 Director Steven Spielberg (center) with his four main leads in the 2021 “West Side Story.”